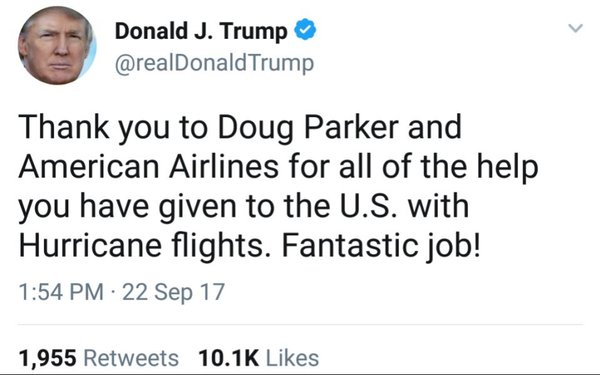 President Donald Trump tweeted a plug for American Airlines Friday afternoon, thanking Chairman-CEO Doug Parker, "For all the help you have given the U.S. with Hurricane flights. Fantastic job!"

The tweet, which came from his @realDonaldTrump Twitter handle, but not his official @POTUS White House handle, struck some Twitter followers as odd for singling out American Airlines vs. other carriers, causing some to question President Trump's motives.

Its the first time Trump has explicitly endorsed a brand via Twitter in some time, and comes a month after major brand CEOs stepped down from the President's Business Advisory Council in response to Trump's tepid response to Nazi, KKK and white supremacist actions during the unrest in Charlottesville, VA.

A day after that exodus, Trump also went to Twitter to imply he was taking action to shut it down, tweeting, “Rather than putting pressure on the businesspeople of the Manufacturing Council & Strategy & Policy Forum, I am ending both. Thank you all!." 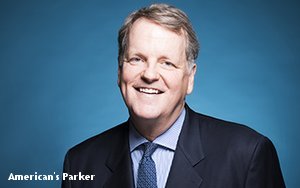