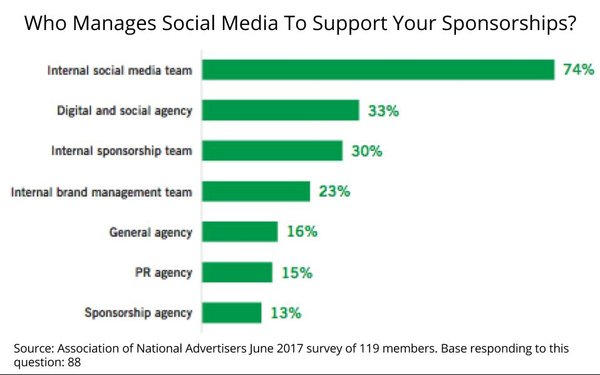 At a time when the use of social media is becoming a more integral part of how brand marketers leverage their burgeoning sponsorship investments, a new study from the Association of National Advertisers finds most of it is being handled in-house.

Three-quarters (74%) of respondents to a member survey conducted by the ANA in June found social-media campaigns supporting sponsorships are handled by their companies’ internal social media teams.

A third or less said this was handled by their agencies, PR firms or internal sponsorship or brand management teams.

The findings, published in a report -- “Use of Social Media and Advanced Technologies for Sponsorship” -- released this morning by the ANA, notes: “These results regarding the internal management of social media for sponsorship are consistent with what the ANA has seen elsewhere.”

The ANA said sponsorships are estimated to be a $23 billion industry in 2017, and the new report asserts that “social media is ‘table stakes’ for sponsorship activation. Social media provides a relatively low-cost means to amplify and activate sponsorships.

"Given the importance that marketers are placing on social media as a sponsorship activation tool, they should approach it with rigor. Achieving goals such as connecting with consumers and improving brand perception will not happen solely with the posting of content to social-media platforms.” 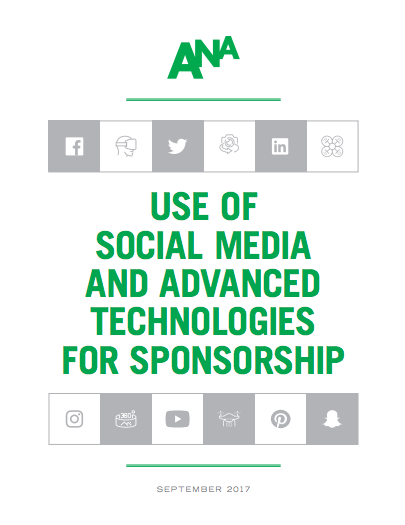