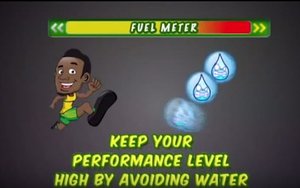 Gatorade has agreed to pay $300,000 to settle a California attorney general’s complaint. The complaint alleged that the PepsiCo-owned beverage company violated consumer protection laws by making misleading statements about water in a video game used to promote Gatorade to teens and young adults.

The game included a “fuel meter” that went up when a cartoon version of Usain touched a Gatorade icon, and went down when he touched a drop of water. “Gatorade reinforced this misleading message through the game’s tutorial, which urged users to ‘Keep your performance level high by avoiding water,’” according to the complaint.

Gatorade promoted “Bolt!” on social media, amassing more than 2.3 million downloads, the complaint stated. The game was played 87 million times worldwide during 2012 and 2013, and more than 70% of players were between the ages of 13 and 24. It was downloaded an estimated 30,000 times in California.

The app is no longer available for download, but was available on iTunes for a time during 2017, according to the AG’s release.

The settlement calls for $120,000 of the $300,000 settlement to be used to fund research or education on water consumption and the nutrition of children and teenagers. In addition, the settlement requires Gatorade to disclose endorser relationships in any social media posts, and prohibits the company from advertising its products in media where children under age 12 comprise more than 35% of the audience. The settlement also prohibits the company from negatively depicting water in any form of advertisement.

The AG’s office said that studies have shown that “so-called advergames” can significantly influence a child’s desire for either healthy or unhealthy foods. It also stressed that sports drinks often have high sugar content, and that The American Academy of Pediatrics has stated that children “rarely need sports drinks” and that “water, not sports drinks, should be the principal source of hydration for children and adolescents.”

In a statement, PepsiCo said that the game “was designed to highlight the unique role and benefits of sports drinks in supporting athletic performance." It added that PepsiCo—which owns water brands including Aquafina and Lifewtr, recognizes “the role water plays in overall health and wellness.”

The Gatorade video game won a 2013 MIxx Award from the Interactive Advertising Bureau for mobile gaming integration, although the awards area on the IAB site no longer includes that game, noted the San Francisco Chronicle.