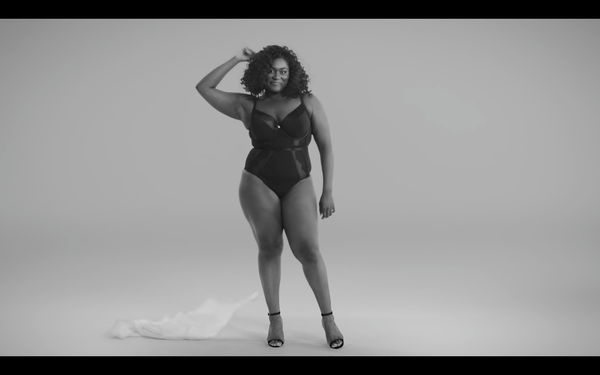 While there’s no shortage of misogyny in the world, the winners of this year’s Femvertising Awards channel that social media meanness into something bigger, some using hate as part of the script.

Lane Bryant wins in its “Inspiration” category, for a sexy black-and-white lingerie ad that plays off cutting remarks people have made about these women’s bodies, with models and actresses like Gabourey Sidibe, Danielle Brooks, Candice Huffine and Alessandra Garcia reading the nasty-grams. “Do you see those rolls?” says plus-size model Ashley Graham, then laughs it off: “Welcome to the bakery, honey.”

And in #MoreThanMean, which wins this year’s People’s Choice award, men squirm as they read harsh (and sometimes violent) tweets to sports reporters Sarah Spain and Julie DiCaro. The cringe-causing PSA, which has been viewed four million times, led to new harassment policies to protect journalists at ESPN.

The contest, organized by SheKnowsMedia, is now in its third year and drew 200 brand entrants. A panel of industry experts select the finalists, with winners then chosen by popular vote. (Some 30,000 voters weighed in this year.)

Other winners include Audi, for its Super Bowl ad highlighting gender pay gaps. And in the category called Dadvertising, an AngelSoft spot about a single dad raising a daughter took top honors.

The award for Normvertising, a category it added this year, went to L’Oréal Paris for My First Women’s Day,an ad starring Brazilian model Valentina Sampaio, a transgender activist, as she prepares to celebrate her very first International Woman’s Day.

“Our focus has been on women and girls,” Skey tells Marketing Daily, but says its added Normvertising

“because pro-social advertising is certainly not focused exclusively on stereotypes that are injurious to women and girls. Mainstream media is normalizing formerly marginalized groups, and a range of stereotypes about gender, race, sexuality, and mental illness. There lots yet to do, but advertising is beginning to play its part.”

Also new in 2017 is #WinningWomen, a category that pays tribute to female athletes, with this year’s award going to Procter & Gamble for its “Raising an Olympian: Simone Biles.”

Dick’s Sporting Goods’s Caila brand took a Wildfire award, for “What Sports Taught Me,” a video featuring singer Carrie Underwood returning to her hometown of Checotah, Okla., interviewing teenage girls about why sports matter to them.