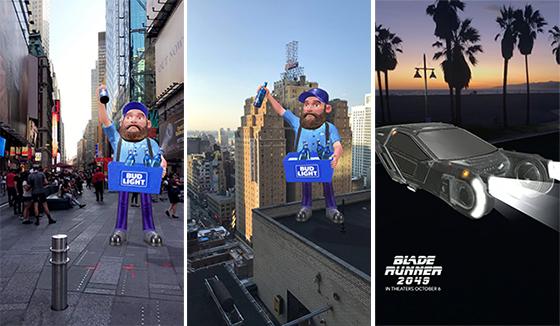 Hoping to usher in the next generation of digital ads, Snap is now inviting brands to sponsor 3D World Lenses.

Imran Khan, Snap’s Chief Strategy Officer, made the announcement at Adweek in New York on Thursday.

Giving brands a sense of the ad’s possibilities, Warner Bros. and Bud Light showed off their 3D World Lenses, on Thursday. Bud’s ad features a ballpark beer vendor who has “Buuuuuuud Light, here” for anyone in the real-world environment in which he’s placed.

This past May, Snap began offering advertisers a basic outward-facing Lens capability, limited to floating objects and atmospheric effects. Now, objects -- from a beer guy to a flying car -- can be more precisely integrated into environments. They also recognize surfaces, so -- once locked in place -- viewers can actually walk toward, away and around them.

The new ads can be bought directly from Snap’s team and run as National Lens, a targeted Audience Lens or a swipe-up attachment to Snap ads. The targeted ads can be tailored to users by age, gender and interest.

Snap first launched 3D World Lenses in April. Since then, the social giant gave birth to what CEO Evan Spiegel has called “the world’s first augmented-reality superstar.” The comment -- made recently during another during disappointing earnings call -- was a reference to Snap’s dancing hot dog.

As of mid-August, the little 3D character had been viewed more than 1.5 billion times with the Snapchat app alone, Spiegel said.