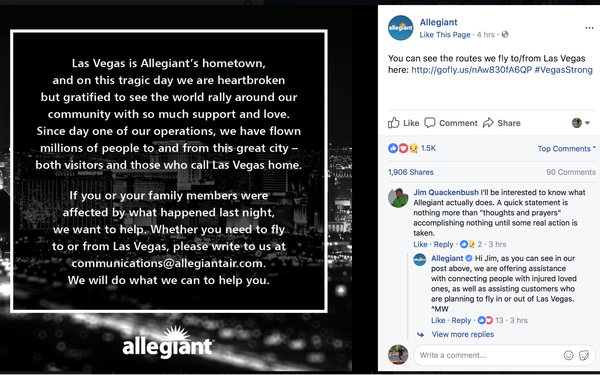 Allegiant Air, MGM Resorts, Chili's, the Las Vegas Visitor and Convention Authority and Live Nation are among the brands that have reacted to the mass shooting in Las Vegas on Sunday night.

Las Vegas-based Allegiant Air announced on its Facebook page Monday afternoon that it would fly families of the Las Vegas shooting victims to the city for free, saying it was heartbroken by the tragedy in its hometown.

MGM Resorts is providing crisis counseling to hotel guests or employees affected by the horrific shooting. The hotel company, which operates 13 properties on the Las Vegas strip, also is offering hugely discounted rooms to family members of victims flying to Las Vegas.

Some companies and brands reacted to the news and ensuing national wave of depression by delaying campaign launches. Chili’s is one national brand that delayed plans to launch new work on Monday. “Chili's is very focused internally on taking care of its employees in the area,” said a spokesperson for the brand.

The Drug Enforcement Administration (DEA) and the nation’s largest all-volunteer drug education group ELKS DAP (Drug Awareness Program) are partnering with the YouTube comedy brand SMOSH to introduce the anti-drug program's first digital and social drug awareness campaign aimed at teens. They planned to launch today but have put it on hold,  according to a spokesperson.

The Las Vegas Convention and Visitors Authority had recently announced plans for a new effort called HyperVegas. Those efforts are likely on hold as the bureau posted a hyperlink on its main web page directing visitors to a page with the header “How to Help.” It includes a statement from LVCVA President Rossi Ralenkotter.

"The entire Las Vegas community is saddened by the events that occurred on the Strip on Sunday evening, but touched by the overwhelming support and strength of our first responders and the Las Vegas community," according to the web page, which goes on to list phone numbers to call for those looking for information on loved ones or missing persons. There is also information on where to donate blood in the area.

“The Las Vegas Convention and Visitors Authority and the entire Las Vegas community thanks you for your support as we continue to heal and help those in need in the wake of this horrible tragedy,” according to the web page.

Live Nation also issued a statement: “We are heartbroken over the tragedy that took place at the Route 91 Harvest festival. To think that anyone would want to inflict harm on a gathering of music lovers is beyond our comprehension. And while we are stunned and grieving over this incomprehensible act of violence, we know that this is a moment when we must come together to prevent more tragedies like this from occurring.

“Live Nation will do everything in our power to support the victims and their families through the aftermath of this horrendous event and extends our deepest gratitude to the heroic first responders who helped save as many lives as possible. To our Live Nation on-site employees, we cannot thank you enough for your bravery and perseverance over the past 24 hours and will ensure you have the resources and support necessary to heal from this.”