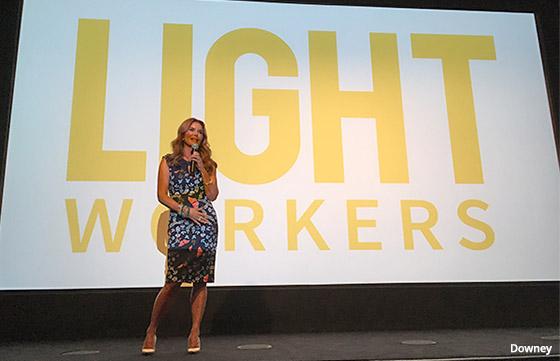 Actress/producer Roma Downey is sick of negativity. "You can't turn on the news without wanting to hide under the table," she says in an exclusive interview with MediaPost. "We have forgotten the good to only hate each other."

Now, Downey and her mega-producer husband Mark Burnett are "shining a light on goodness" by introducing LightWorkers.com, an online destination for "uplifting and positive" short-form digital and social content. MGM is part-owner through their joint venture LightWorkers Media.

This project comes from Downey's desire to build a "safe space" for both readers and advertisers. She was in New York during Advertising Week to court advertisers, as well as celebrate the platform's official late September launch.

Carnival has signed on as launch sponsor to leverage its advocacy travel brand Fathom. While Fathom originally launched as a separate cruise ship where travelers were able to do good while traveling, Carnival is now incorporating the program across its ships. As part of this sponsorship deal, LightWorkers will create and distribute original content, with social and digital support from Carnival's cruise line brands. "This has the great potential to grow," says Carnival CEO Arnold Donald.

Downey is also speaking with brands about video-franchise sponsorship, custom-branded videos and original branded series that align with a shared mission of doing good.

While faith is infused into some of the content, the overall platform is not specifically or overtly religious.

"We want to be the voice that speaks to everyone [and have] something for anyone," says Maggie Furlong, vice president, content and production, LightWorkers. She is seeking additional voices and series pitches to support the initial 25 original series. Female storytellers are of a particular interest. The only requirements are positivity and shareability.

Downey specifically designed this platform around the Internet in order to build a community. "Unlike TV or movies, this is a living thing." She hopes in the future, users will contribute and share their stories to bolster their original content.