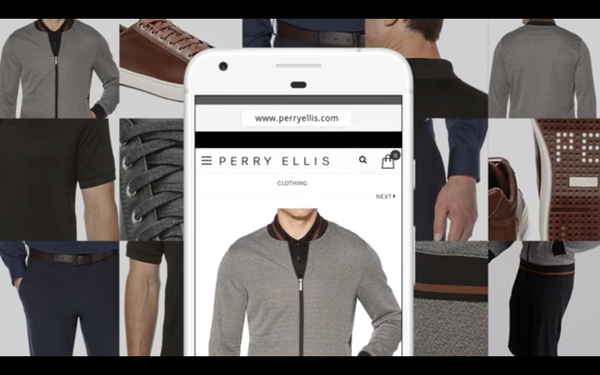 When it comes to getting dressed for an occasion, America’s men are baffled: Some 81% say they’re often bewildered about what they should be wearing. Perry Ellis International hopes to set them straight, using Amazon’s Alexa as a personal stylist.

“This whole casualization trend has created a lot of confusion,” says Melissa Worth, president of Perry Ellis Menswear. “The majority of men aren’t sure about what they should be wearing, and while dress codes are more relaxed, they still want to look polished and put together.” A third say they have even skipped an event because they weren’t sure if they had the right clothes. And 70% were open to some kind of technology fix to their wardrobe problem.

In the midst of its research on what men were most concerned about and ways to reach them digitally, she tells Marketing Daily that the brand learned that the heaviest users of voice-activated assistants are between 25 and 34. “And since our core target is 32, we thought this could be a perfect fit.”

Claiming it’s a first for Amazon Alexa, the “Ask Perry Ellis” program is digital simplicity itself, and starts with a question like “Alexa, ask Perry Ellis what I should wear to a beach wedding?” Worth says Alexa then asks a series of questions—formal or semiformal? Hot weather or cool?—and makes a recommendation, like “a linen suit.” Perry Ellis then sends the user an email with some of its clothing options, “which he can then click on, order, and have in a few days.” Midnight Commercial developed the technology for the virtual stylist.

The idea is to create “a seamless shopping experience,” she says, aimed at men with a household income of $75,000. “He wants permission to be stylish.”

Currently, Alexa is programmed to handle 150 different occasions selected from common online searches, from a Skype interview or first date to Mardi Gras or a beer run. But those will expand as more people use the service, Worth says.

She says the brand is publicizing the program with a how-to video on its social-media channels.

Perry Ellis, citing data from eMarketer, says 35.6 million Americans use a voice-activated assistant device at least monthly, up some 130% from last year, with 71% owning an Amazon Echo.