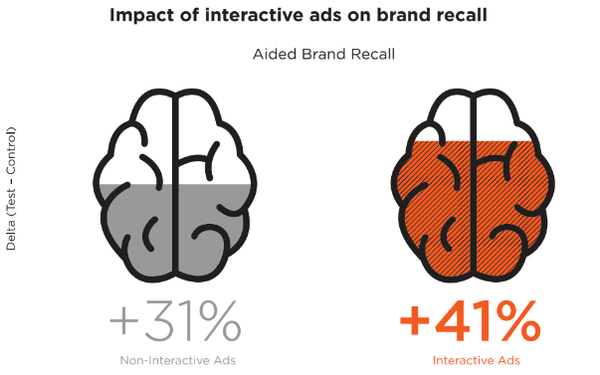 The study, which was conducted with Tremor Video DSP, was based on a panel of 2,157 online users who downloaded a custom app to view video content at their own discretion.

Prior to viewing the content, the participants were served a pre-roll ad, just as they would “in the wild.”

It was not clear from the data provided by the Interpublic units what role, if any, wear-out might play in engagement and attentiveness levels -- but the study concluded that interactive video units make ads “32% more memorable than non-interactive ads,” regardless of whether consumers actually interact with them or not.

“Such attention metrics are normally reserved for the viewing of television advertisements and contradict the prevailing conventional wisdom that shorter is better for capturing consumers’ attention,” opined Ariane Gut, vice president-head of insights and analytics at Tremor Video DSP, adding: “Brands that have tested mobile interactive video ads for themselves have experienced an uptick in engagement, demonstrating that there’s more value that can be had from existing assets when layered with elements designed to give consumers more of an immersive experience.”

Brands participating in the trial included Amazon, Arby’s, FCA, and MillerCoors. Details on the creative and interactive execution were not provided at presstime.