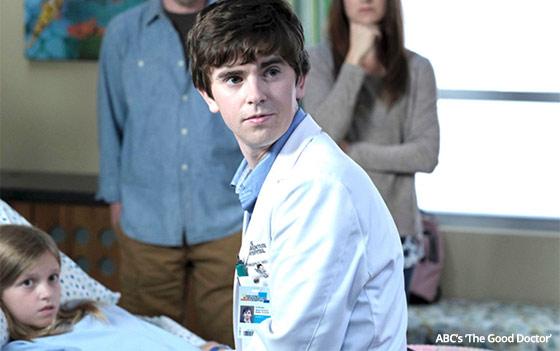 ABC spent a lot of time with on-air TV show promotions this summer -- far more than other networks. It needed to — and the move has paid off.

The network had five new fall shows to launch. It also moved big shows to other nights -- “black-ish” to Tuesdays, “Once Upon A Time” to Fridays. And of course, ABC’s Thursday night lineup is filled with Shonda Rhimes-produced dramas.

“We did give a lot of ammunition to those priorities,” says Rebecca Daugherty, executive vice president of marketing for ABC Entertainment and ABC Studios.

Kantar Media says ABC was the leading network in promos and devoted the most promo ad time for its fall 2017 programming: 34.4 hours and 4,779 total spots, from July 3 through September 24.

One major effort -- drama “The Good Doctor,” which runs Mondays at 10 p.m. -- has scored high results right out of the gate -- averaging a 2.4 Nielsen rating in adults 18-49 and 11.5 million viewers. That's a 9% gain and a nearly 2% increase, respectively, versus its week-before debut.

ABC also had major challenges from a year ago. For the 2016-2017 TV prime-time season, ABC was in fourth place among 18-49 viewers with an average Nielsen 1.6 rating and in third place among all Nielsen viewers at 6.2 million.

Unlike a year ago, Daugherty says the network won’t be slowing down its marketing efforts after its fall shows are up and running.

“The major changes are that we have longer sustaining campaigns,” says Daugherty. “People aren’t coming on night one of a new show anymore. We are continuing to advertise -- in some cases, three and four weeks beyond premiere.”

ABC’s intensity also was due to the average length of its on-air TV promos, with 61% of those spots 30-seconds or longer, according to Kantar Media. By comparison, CBS devoted only 20% of all its promo time to spots for those running 30 seconds or longer.

Like many networks, ABC started running on-air promos for its five new shows and returning series right after the upfront presentations in May. Outdoor advertising started in August.

Social media? “Those budgets have gained quite a bit,” says Daugherty. She that as with many networks, radio is used for promotion the day a show airs.

After its fall shows' winter finales in late November/early December, ABC will ramp up marketing again for mid-season starts in 2018. That includes the returns of “American Idol” and “Roseanne,” comedies “Alex, Inc.” and “Splitting up Together,” and other shows.

Looking at specific off-air promotions, for its new Tuesday night 10 p.m. drama “Kevin (Probably) Saves the World,” a team of “Kevins” hits the streets in three top markets to do good deeds for others: opening doors, hailing taxis, carrying  bags, well as encouraging consumers to do their own good deeds.

In addition, show star Jason Ritter will attempt to break a world record for hugs on “National Hug a Kevin Day.”

In promos for its new comedy “The Mayor” (Tuesdays at 9:30 p.m.), ABC used 11 real-life mayors. The Courtney Rose character, the new mayor played by Brandon Michael Hall, asks for their expertise via a mayor hotline.

To launch another season of its big Thursday night block of dramas in August, ABC used a new song from music star Taylor Swift: “Look What You Made Me Do.”