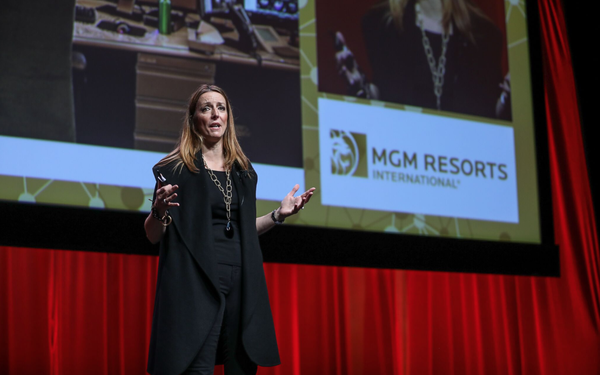 ORLANDO, Fla. — When MGM Resorts CMO Lili Tomovich put together her presentation for the Association of National Advertisers’ Masters of Marketing, she couldn’t have imagined it would follow the massacre at MGM’s Mandalay Bay hotel in Las Vegas days earlier.

Tomovich opened her remarks with a live performance by Cirque du Soleil on the stage. When she thanked them, she said they brought her “a much-needed smile.”  She said the last week has been so chaotic that she really didn’t get a chance to begin to process the tragedy outside her hotel’s property until she was on the plane coming to the conference.

“I want to express deep gratitude for all the support we have received from not just the community, but the city, the country and, frankly, the world,” Tomovich told the attendees. “We have had some dark, dark days.”

She explained that her presentation had been put together before the shootings, and she apologized in advance if anything seemed insensitive or inappropriate. The company had broken a new campaign only two weeks earlier, but it was immediately put on hold after the shootings, she said.

The Las Vegas Convention and Visitors Authority (LVCVA) broke a campaign the evening of Oct. 3 wth digital marquees along the iconic Las Vegas Strip and throughout the Las Vegas Valley. The marquee signs showed an image of the Strip with verbiage stating, "We've been there for you during the good times. Thank you for being there for us now. #VegasStrong”

“Strength is valet parkers who become medics, mothers who become emergency responders, sisters who shield brothers because they love them with a love that has no bounds.

“Strength is first responders who tirelessly carry visitors and locals alike to safety until sunrise. It’s our medics and surgeons, all of them, who come running to the calls of those in need. It’s the police who turn over every stone to make this city safe again. It’s the local businesses that became sanctuaries for people to run to.

“Strength isn’t evil or misguided. Strength is the voice of community and love in the face of the unspeakable.”

The spot is a tribute to survivors of the shooting who helped each other during Sunday night’s massacre when 59 people were killed and more than 500 wounded at the Route 91 Harvest Festival country music show across from Mandalay Bay.

The campaign is from R&R Partners, the ad agency known for the “What Stays in Vegas” campaign. The ad was rolled out to social media Oct. 4 and now is hitting cable and network TV.

Tomovich did not reveal when MGM Resorts would resume its ad campaign, themed “Welcome to the Show.” The effort, from McCann New York, was 18 months in the making, she says. It reflects MGM’s shift from a hospitality and gaming company to a global entertainment brand.

“After Sunday’s events, I believe even more that we need more entertainment, we need more moments to smile,” Tomovich said.

In the process of rolling out the effort to the company’s 75,000 employees, the marketing team developed a mnemonic acronym to help communicate what was expected of them. They used the word “show” with each letter standing for the idea guest experience. Employees were urged to  S — Smile, H— Hear their story, O — own the experience and  W — Wow the guest.

“This was actually an incredibly helpful tool for us in the last four days,” she says. Employees, who were in shock themselves, fell back on the strategy to help guests who were understandably upset and had needs outside the ordinary.

Even before the now-on-hold campaign launched, internal work has resulted in boosting MGM’s stock price above 70% over the past 17 months, she says. Staff friendliness is at an all-time high, and there is renewed employee pride.

Tomovich left the audience with some suggestions for improving their own marketing. Marketers must understand and appreciate their brand’s heritage and DNA, define their brand’s purpose and role.

“Repositioning a brand is the entire organization’s responsibility,” she says. “Before you tell your brand position to the world at large, you better damn be ready to deliver it.”