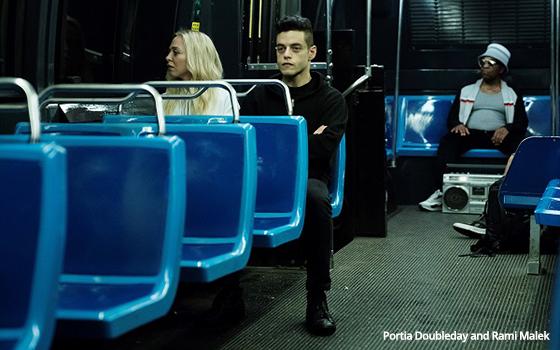 “Mr. Robot” bites off a bit more than it can chew sometimes, but at the same time, one of this show’s most attractive characteristics is its ambition.

This show means to encompass everything that can conceivably go wrong in our wired, interconnected and dangerously co-dependent world. And it largely succeeds.

It shows us the consequences -- among them, worldwide economic collapse followed by general chaos -- in a way that feels as if it could happen, or is happening, in the very near future, if not right now.

For example, in one lengthy sequence in Wednesday's third-season premiere of this eerie, award-winning USA Network series, the show's principal protagonist, Elliot (Rami Malek), is seen walking down a New York street.

Somewhat incongruously, he is reciting a soliloquy about all the ills of the world (he is seen mouthing some of it aloud, while some of it is rendered as thoughts he is hearing in his head).

As he walks, we see storefront after vacant storefront -- all with signs in their windows advertising them “for lease.”

In the show, this retail cataclysm is caused by the worldwide economic collapse cited above that was brought on by a global computer hack that erased most of the world's financial records.

But we are having a retail cataclysm now (alternately referred to in the popular press as a “retail apocalypse” or “retail Armageddon”) that is resulting in a greater number of vacant storefronts here in New York than many of us can remember.

In this way, the people who make “Mr. Robot” give us a world we recognize. In ways large and small, the world of the show is little different than the one we are living in now.

The show’s ambition reveals itself in the aforementioned soliloquy, in which the introverted Elliot works the world’s problems around in his brain and in the end takes responsibility for the mess the world is in.

That's because he’s the hacker who was principally responsible for disabling the world's computer networks. His soliloquy talks about the power he felt over the whole world because he knew the keys to disrupting everything that the world's people and institutions held dear.

When he delivers this external and internal speech, you can almost imagine the words being recited by any one of today's tech titans whose computer networks are disrupting the world and seemingly coming to dominate it -- but only if these people are capable of feeling regret.

His soliloquy also takes in aspects of our current political situation -- implying through words and imagery that the rise of Donald Trump and the subsequent tumult resulting from his election are also caused by a confluence of global network complications that are now too complex for anyone to control. Hence, a guy like Donald Trump becomes president of the United States.

This line of thinking (if that’s what it is) is not all that persuasive, but in the context of this show, its consideration is no less surprising or outlandish than any of the other doomsday scenarios that this show posits.

In its third season, “Mr. Robot” is apparently unafraid of taking on any subject and making it seem as real as the world we live in. Welcome back.