For Sitcom's Sex Harassment Storyline, It's A Question Of Timing 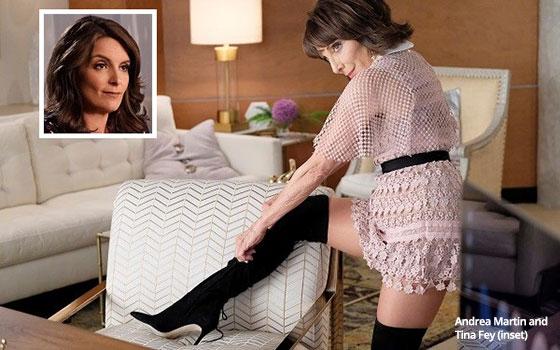 The makers of the NBC newsroom comedy “Great News” certainly had no idea their episode about sexual harassment in the workplace would end up airing smack in the middle of this week's Harvey Weinstein harassment story.

The show was likely made weeks ago, but it is appearing tonight (Thursday, October 12) on NBC. The show presents the issue of sexual harassment with a twist: Instead of being perpetrated by a powerful man, the villain here is a powerful woman.

The only problem with the episode could be its timing. And as everybody knows, in comedy, timing is everything.

By airing this particular storyline now, the show puts itself in jeopardy of being misjudged or criticized for making light of an issue that is no laughing matter.

The allegations piling up daily this week about Weinstein's behavior going back decades have ignited a national conversation -- again -- about this kind of sexual harassment behavior.

Can comedy provide any perspective? Well, the late-night monologues have begun getting into it, and to my knowledge, there has been no backlash from anyone.

I even saw one story on Wednesday in which Tina Fey, one of the executive producers of “Great News” (and appearing in a recurring role this season), came in for praise for the timeliness of this week's storyline, as if she planned it all along. Kudos to whatever publicist put that one across.

In the episode titled “Honeypot!,” the exec being accused of sexual harassment is the one played by Fey -- the fictional TV network’s new boss, Diana St. Tropez. In the show, she is seen overtly harassing a series of male staffers, asking them to do ridiculous things in her office.

With its female sex-harassment villain, the show turns the usual sex-harassment story on its head. “How many men have to come forward before you believe us?” one male victim laments when a female colleague doubts the veracity of his and the other men's accusations against the new CEO.

The episode touches on other aspects of sex harassment such as victim-shaming -- to which one of Ms. St. Tropez’s nerdy male victims declares: “I dress sexy because it makes me feel good!”

The episode’s script also brings up several real-life sex-harassers who have been in the news, including Bill Cosby, Roger Ailes, Billy Bush and Bill O’Reilly. Hey, I just noticed something here: Three of these are named Bill.

First introduced last spring, “Great News” just started its second season (its first full one). It’s about a young woman who works as an associate producer on a TV news show in New York whose 60-something mother (Andrea Martin) is hired as an intern working in the same newsroom.

In the photo above, the mother is sent into the new CEO’s office to try and entrap her in a sex-harassment sting.

The episode concludes with another twist in which the multimillion-dollar payoffs paid to some of the real-life harassers mentioned above are cited. It is a barbed, satirical way of pointing out that the three profited from what they did.

For all anyone knows, the three might feel differently about that. As it happens, one of them --  Ailes -- is dead (he died last May), so we’ll never know how he felt about being found out as a serial sex harasser and then publicly fired -- millions or no millions.

As for Thursday night’s “Great News,” the view from here is that it is not a bad episode at all. On the contrary, it’s pretty smart. However, in light of this week’s headlines, its scheduling seems ill-timed, to say the least.

tv
1 comment about "For Sitcom's Sex Harassment Storyline, It's A Question Of Timing".
Check to receive email when comments are posted.
Next story loading