Total Viewers Or Better Demos: Who's No. 1 In Late Night? 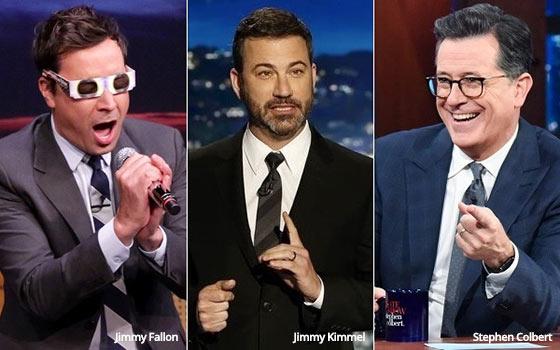 By the measuring stick that most people understand best, “The Late Show with Stephen Colbert” is the nation's top-rated late-night show.

It was true through the latter portion of last season, and it continues to be true this season after two weeks.

The measurement that forms the basis for this No. 1 ranking is the show's total viewer count -- actually an average over five days.

However, NBC insists that their guy -- Jimmy Fallon -- is the “winner” of the weekly ratings race in late-night because he has the better numbers in the demo they are after -- 18-49 viewers.

As a result, journalists on the TV beat receive weekly press releases with headlines like this: "Tonight Show’ Wins the Late-Night Ratings Week of October 2-6 In 18-49" (from NBC this past Tuesday); and "The Late Show’ Starts the Season With Its Second Consecutive Late Night Win" (from CBS on the same day).

They are both technically correct. Fallon's average in the demo for the five-day week -- last week: October 2-6 -- was higher than Colbert's. However, Colbert's total viewer count was higher than Fallon’s.

Certainly, when Fallon also led the pack in total viewers, NBC's press releases emphasized that fact, along with his demo strength. Now that he doesn't win in total audience, NBC's headlines stress the demo.

At the same time, CBS's press releases about Colbert's win in total audience ignore the demo picture completely. That may be because the “Colbert” show possibly chases a different demo -- 25- to-54-year-old viewers -- which would set it apart from its rivals. So when it comes to considerations of who's No. 1 in 18-49 viewers, CBS is not playing that game at all.

If this is the case then -- and speaking as one of those journalists on the TV beat -- I would like to see a demo number in the CBS ratings releases.

One reason for a network choosing to emphasize a total-audience number like Colbert's in a news release that is nationally distributed is that the total-audience figure is the easiest piece of data for the greatest number of people to digest and understand.

When you start getting into demo claims in news releases, not only will lay readers have no conception of what you are talking about, but plenty of the journalists who receive these releases won't understand them much better than the people who will read their stories.

For this reason, it is more or less agreed that the No. 1 late-night show is the show with the most total viewers.

However (and this is a big however), network execs and publicists will sometimes argue that the demo number is really the best benchmark because, they say, that's the number that the ad sales are based on.

According to this line of thinking, the show with the best demo profile makes more money than the other guys. Thus, that show would be No. 1.

Of course, networks seem to make this argument much more strenuously when they are not leading in total audience. When they lead in the total-audience category, they suddenly become just as enthusiastic about promoting that number as they did when they could claim the top spot only in the demo average.

So who is No. 1? At the risk of being labeled a simpleton (and not for the first time), I personally tend toward applying the total-audience number to making this determination. It's cleaner. It requires no explanation. It contains fewer caveats and asterisks, you might say.

It's like a score in a ballgame. Who had more points/viewers? Colbert did. Can CBS use these numbers to its advantage when it comes to ad sales? I don't know. You will have to ask them.

I do know that CBS gets a p.r. benefit from these total-viewer numbers. And so would NBC if they could claim them.

tv
7 comments about "Total Viewers Or Better Demos: Who's No. 1 In Late Night?".
Check to receive email when comments are posted.
Read more comments >
Next story loading