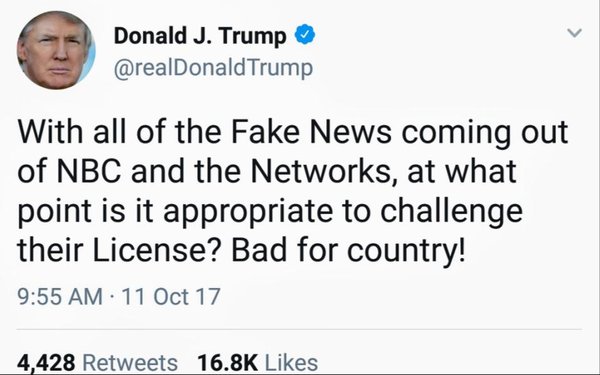 President Donald J. Trump has issued a not-so-veiled threat to NBC challenging the licenses the Federal Communications Commission issues for its local broadcast stations. The threat, which came in a tweet posted this morning, was the most explicit statement to date that the President of the United States wants to censor news coverage about his administration, raising the prospect of challenging a broadcaster’s licenses because it doesn’t agree with its coverage.

The threat isn’t just another in a long litany of complaints Trump has made about the “fake news” coverage by mainstream media outlets such as NBC News, CNN and major newspapers including The New York Times and The Washington Post, but has teeth because Trump has sway over the commission, including appointing its commissioners.

Following a tweet refuting an NBC News story that Trump had asked his military advisors to increase America’s nuclear arsenal tenfold and dismissing it as “pure fiction, made up to demean,” Trump tweeted: “With all of the Fake News coming out of NBC and the Networks, at what point is it appropriate to challenge their License? Bad for country!”

Trump, who declared war on mainstream news outlets during his first full day as President, has ramped up the rhetoric over his term, but this morning’s tweet is the first time he alluded to using the power of his office to retaliate against a broadcaster for coverage he doesn’t like.