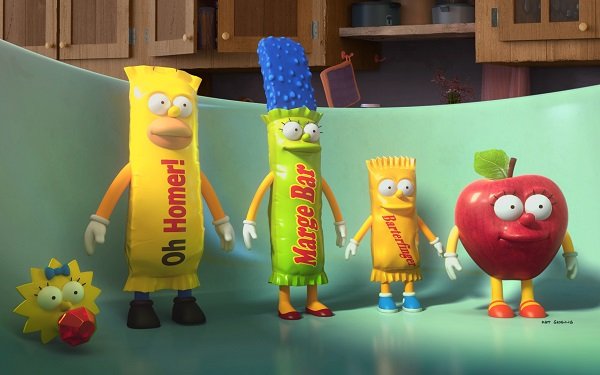 Bart Simpson has long been associated with the Butterfinger brand, so it’s not too surprising that he would wind up in the guise of a Butterfinger bar (renamed “Barterfinger”) in an episode of “The Simpsons.”

His appearance in the familiar bright yellow wrapper is particularly timely in this year's annual “Simpsons” Halloween special -- the 28th of the series and subtitled, as usual, “Treehouse of Horror” with this year’s Roman numeral, “XXVIII.”

The episode featuring “Barterfinger” and the rest of his family as trick-or-treat candy bars (photo above) airs this coming Sunday (October 22), nine days before Halloween, and during the prime shopping period for Halloween candy.

So hats off to Butterfinger for Barterfinger. What's really funny about this particular product placement is that it includes Homer (as the candy bar “Oh Homer!”) uttering what he evidently feels is a very negative truism about Butterfinger.

In this particular segment, the Simpson family of candy bars (plus Lisa, the child health-food nut as an apple) are seen in a trick-or-treat basket awaiting the arrival of the evening's trick-or-treaters. They apparently live in fear of being taken by costumed youngsters and having their family split up and also eaten.

In this context, Homer tries to assuage Bart's fears of being taken by assuring him that Butterfingers are always the last bars to be chosen, so he has nothing to worry about as long as there is anything better sitting around.

Elsewhere in this annual anthology episode, the family gets involved in a spoof of “The Exorcist” when baby Maggie becomes possessed by demons.

In another segment, Lisa and her cat find a portal in her room to another world where she encounters a new version of her family rendered in three-dimensional animation and all with buttons sewn over their eyes. (Don't ask.)

And in the third major segment, Homer, who has long been known as an indiscriminate glutton, suddenly discovers the joy of cooking himself. (Again, don't ask.) This culinary storyline features Mario Batali in a guest voice.

For many years, the annual “Simpsons” Halloween special has been a highlight of the new fall season. It is also true that some of these “Treehouse of Horror” shows are better than others.

After previewing this year's model last week (thanks to Fox), I have to say it is not one of the best. Among other reasons, the segment in which Homer cannibalizes his own flesh is grotesque even by this show's standards, which over the years have been purposely low indeed.

And unless their appearance was so brief that I blinked and missed it, where, may I ask, were Kang and Kodos? The two slobbering aliens who traditionally appear in this special, at least for a few seconds, were nowhere to be seen -- to which I have to ask: Is nothing sacred?