Megyn To Women Of America: Let Me Empower You 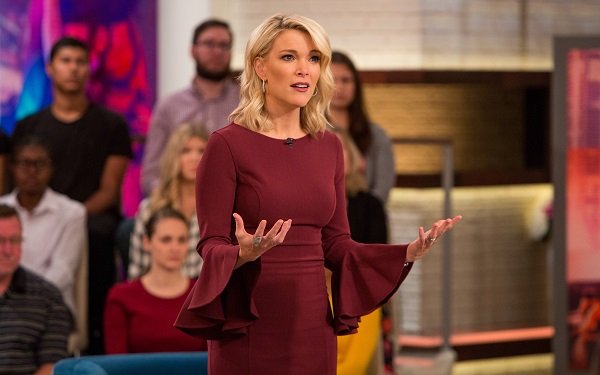 A new promo spot for Megyn Kelly was spotted over the weekend running on at least two NBC-owned cable channels.

I had not seen it before, so it was new to me. I know I caught it once on USA Network and then again on one of the other NBC cable networks, which might have been CNBC or maybe even MSNBC.

This promo spot had Megyn interacting with women. If memory serves, she may have even high-fived a few of them.

Please forgive me if I'm a little fuzzy on the details. The way this usually works is: I see something like this on TV and then go in search of it online the next day to help gather information for the day's TV Blog.

Unfortunately, I went in search of this promo spot online on Monday morning and came up empty, which is pretty unusual. Oh, well.

In addition to the visual imagery of Megyn enthusiastically smiling and slapping palms with women, I am certain that the promo copy provided by a voiceover narrator included some variation on the words “empower” or “empowerment” as they pertain to the empowerment of women.

Unless I dreamed this, it seemed to me that this promo spot was actually promising that Megyn Kelly would be empowering women on her all-Megyn hour of "The Today Show," and that women would feel empowered by her if they would only tune in and watch her.

When I heard this, I remember thinking to myself: Gosh, that's a lot to put on a person. Apparently, it's not enough to just do a good job on TV doing things like interviewing people, appearing presentable and upbeat, and perhaps reporting on and discussing what is happening in the news that morning (after all, “Megyn Kelly Today” is a production of NBC News).

But empowering people? I understood that the promo was trying to position Kelly on some other, more metaphysical plane than as a person who would merely smile a lot and interview a succession of guests.

But when promo copy for a TV show starts talking about empowerment, suggesting that a TV personality will deliver it, and that a viewer will receive it simply by watching the TV show, then that's when this kind of commercial goes off the rails for me.

When you start doing that, you enter the territory of advertising disbelief that has long been occupied by other national advertisers such as insurance companies, hospitals and healthcare networks, and banks and investment companies.

For example, commercials for healthcare “networks” (basically umbrella companies that own multiple hospitals) always promise you the best care imaginable -- which in your own experiences with hospitals rarely turns out to be true.

It's the same with commercials for big banks. They promise you life-long personal attention for your finances that will put your mind at ease and allow you to float carefree into retirement. In the meantime, here in the real world, you can't get past the automated phone system when you call a bank or insurance company.

Few of us really believe these commercials, yet those industries persist in them anyway. It's the same with TV when it promises that a female talk-show host will “empower” her female audience.

I get it. The new Megyn Kelly promo spot -- and other aspects of NBC News’ ongoing promotion campaign for her -- are intended to position her to women as “just like” them.

Their issues, challenges and obstacles are hers too. She talks their language, the promos try to say, and women gratefully high-five her for it.

The problem is, Megyn Kelly is not this everywoman NBC News is trying to portray her as. Instead, she’s a former lawyer who became famous and earned respect with her tough-as-nails interviewing style on Fox News Channel.

If women found anything empowering about her, it was that she was a woman sticking it to people -- male or female -- who came on her show and were not telling the truth.

On Fox News, she was a tough cookie. On NBC News, they expect her to bake cookies.

cable tv, news, tv, women
2 comments about "Megyn To Women Of America: Let Me Empower You".
Check to receive email when comments are posted.
Read more comments >
Next story loading