MGM Under Fire For #VegasStrong Ad 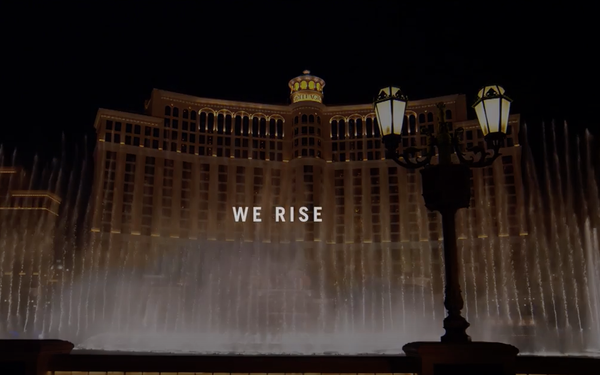 MGM International is being criticized on social media for releasing a TV spot that features shots of its multiple Las Vegas hotels.

The spot debuted on YouTube on October 15 just two weeks after the horrific mass shooting at the company’s Mandalay Bay Resort and Casino.

The spot also was posted on Twitter: “Together, we rise. #VegasStrong.”

“I’m genuinely surprised MGM would approve, let alone produce and air, something so seemingly insensitive and uncaring,” Harteveldt tells Marketing Daily. “They need to pull this as soon as possible.”

The ad was a replacement for a previous spot called “Welcome to the Show” released just before a gunman opened fire on a country music concert from the 37th floor of the Mandalay Bay, killing 58 people and injuring 546 others. That TV spot was pulled by the company earlier this month. MGM Resorts CMO Lili Tomovich told attendees at the Association of National Advertisers’ Masters of Marketing conference there was no date set for its return.

MGM Resorts International announced Oct. 3 that it will provide donations through the MGM Resorts Foundation in the amount of $3 million to fund humanitarian assistance to victims of the Las Vegas shooting, along with organizations who provide support to those who are first on the scene to assist in traumatic events.

Still, the new ad ruffled the features of Twitter users, with people stating they believed the corporation’s latest effort seemed to be an attempt to profit off the tragedy.

“I’m not sure this is the way the brand should have gone,” says Robert Passikoff, founder and president of Brand Keys, Inc., which studies brand loyalty.

While there eventually had to be an acknowledgment of the deadliest shooting in modern U.S. history and some sense of ameliorating the fallout, this spot has the appearance of monetizing a disaster, he tells Marketing Daily.

“The thing is, in a more visually literate marketplace, it’s more the visuals than the actual message that make this less effective than it could have been,” Passikoff says. “They seem to have been blind to the fact that it appears to shoehorn Vegas visuals to fit the song."