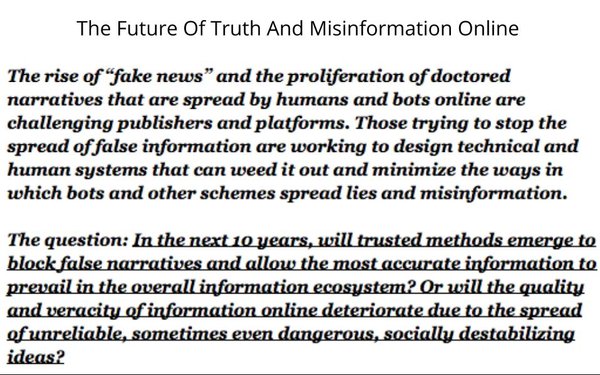 An exhaustive study of more than 1,000 experts finds they are split over the impact that digital media will have on society’s consensus of truth. The report, “The Future of Truth and Misinformation Online,” released this morning by the Pew Research Center, opens with the fact that the Oxford Dictionaries declared “post-truth” as the word of the year for 2016, defining it as “relating to or denoting circumstances in which objective facts are less influential in shaping public opinion than appeals to emotion and personal belief.”

The study interviewed more than 1,100 internet and technology experts over the summer on their views about whether “trusted methods” will emerge over the next 10 years to “block false narratives and allow the most accurate information to prevail in the overall information ecosystem?”

The consensus was a glass half-empty view, with 51% projecting the information environment will not improve, while 49% expect it to get better.

“Both camps of experts share the view that the current environment allows 'fake news' and weaponized narratives to flourish, but there is nothing resembling consensus about whether this problem can be successfully addressed in the coming decade,” Lee Rainie, Pew Research Center’s director of internet and technology research, said in a statement highlighting results of the report. “They disagree about which side comes out on top in the escalating arms race: those who exploit human vulnerabilities with internet-speed manipulation tactics or those who create accurate information and reliable delivery systems for it.”

A key issue influencing the future is an economic one, according to the report’s co-author Janna Anderson, director of Elon University’s Imagining the Internet Center, who noted the information “environment can’t be improved without more well-staffed, financially stable, independent news organizations whose signals are able to rise above the noise of misinformation to create a base of 'common knowledge’ for the public.”

The second key finding urged the need for greater media literacy in society so that individuals are better equipped at differentiating “fact from falsehood.”

The 500 page report can be accessed here, but the top lines include: