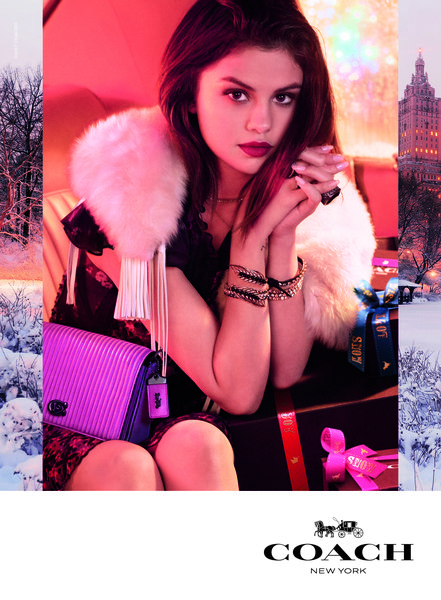 The new campaign, shot by photographer Steven Meisel, features Gomez in a vintage Plymouth Fury, driving around a glittering New York City. Coach and Gomez first teamed up last year in a deal reportedly worth $10 million, and this new campaign follows the launch of the Coach X Selena Gomez collection in August.

Gomez, who is Instagram’s most-followed user (128 million and counting), is considered a key element in Coach’s comeback strategy, helping the brand recapture some of its former glory by building its reputation with young Millennials. And since signing Gomez, the brand is reported to have increased its social-media followers by some 50%. It’s also more aggressively targeting young women with its stepped-up personalization program, called Coach Create, which allows buyers to make bags their own by adding embellishments like flowers, switch out straps and mix and match colors.

For the holiday ads, she carries a Coach classic bag known as the Dinky, and also wears key pieces from Coach’s jewelry collection. But the Selena Grace bag, launched in August, has been “performing well,” writes Anna Andreeva, an analyst who follows the company for Oppenheimer & Co., which rates the company positively with an “Outperform” ranking. She says the coming holiday season presents opportunities in the $300 to $400 range at Coach’s full-price stores.

Last week, Coach announced it is changing its name to Tapestry later this month, which it says better reflects a company that now owns such brands as Stuart Weitzman and Kate Spade & Co.

“With creative designer Stuart Vevers' influence on both the full-price channel and outlet,” Andreeva says Coach’s comparable-store sales have gained for five consecutive quarters, and that “synergies from the Kate Spade acquisition are already coming in ahead of plan. Coach now controls two-thirds of the North America aspirational price point handbag space.”