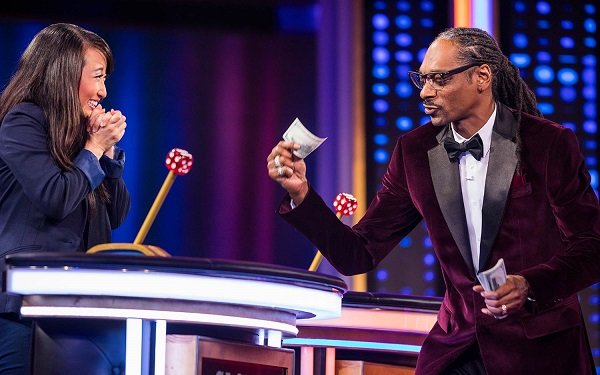 Snoop Dogg is one of those personalities who many might envy.

These days, his “work” life (if you can call it work) can be described in these four words: “Get high, get check.”

Sure, there is probably more work than meets the eye in a typical day in the life of Snoop Dogg. But on the other hand, maybe not.

His newest venture, and the subject of this TV Blog, is his new quiz show on TBS -- actually an old quiz show, “The Joker’s Wild” (original premiere date: 1972).

Snoop gets a “Snoop Dogg Presents” title before the show title, and he is the host of the show too. Other than that, there's not much to it.

I recall it had something to do with a giant slot machine that clamored and jingled in the background and, like the real ones in casinos, this one would spin and contestants would hope to be rewarded with jackpots of money.

The new Snoop Dogg version has a big slot machine too. One thing it has that the old show did not have is a host who is famous for two things -- as one of the most successful rappers to come out of L.A. in the 1990s and, then and now, for smoking lots and lots of pot.

As a result, marijuana comes up often as a topic for discussion and quiz questions. At least it did in the premiere episode that TBS provided for preview (the show premieres Tuesday night at 10 Eastern on the cable channel).

How did they work the topic in? In a couple of ways. One was a pun on the word “pokemon,” which became “smokemon.” In another instance, a contestant described her job as some sort of social media consultant in the legal marijuana-growing industry.

And the subject made its appearance in the names of question categories such as “Name that strain” and “Canadian bakin’.” It's the kind of stuff that's funny, but only when you're stoned (or so I have heard from others).

As host, Snoop acquits himself very well. He is suave, well-dressed (in what appears to be a purple velour tuxedo jacket) and enthusiastic in his guiding of the game and his handling of the contestants. (Game show hosts will tell you that wrangling over-excited contestants is a big part of their jobs.)

The way the show works is: There are spins of the big slot machine, and then Snoop asks a question. Where the ease or difficulty of its questions is concerned, this show will never be mistaken for “Jeopardy.”

The questions were ridiculously easy. Here's an example: Which one of these three things is not a style of clam chowder? (A) New England. (B) Manhattan. (C) Indiana. I'm not even going to supply the answer here, but here's a hint: The answer is the place that's not near any bodies of water where you might find clams.

The show is fun enough, it's not vulgar, and it is certainly easy enough to be understood by a great many people for whom “Jeopardy” holds no attraction.

Not that there’s anything wrong with that. But at the same time, while I watched the premiere episode, I couldn't help thinking: Why is this show even on? Or to put it another way, what’s the point?