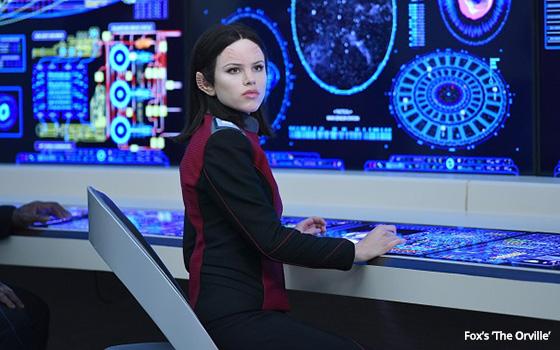 All but one of the new fall network shows have premiered -- and the only sound you're hearing is the proverbial chirping of crickets.

There's a perceptible malaise here in the heart of the new fall season, roughly four weeks since it officially began.

In case you're wondering, the sole new fall entry that has not yet premiered is the new “S.W.A.T.” on CBS, scheduled for November 2. Maybe it's pretty good, but I''m not holding my breath expecting it to suddenly lift the new fall season.

I haven't seen “S.W.A.T.” yet, but I have seen just about everything else, and since August, I have reviewed them all in one way or another. Looking back, I can think of none that especially distinguished themselves, and many that still have me scratching my head over them.

The best example of these is “The Orville” on Fox, Seth MacFarlane's ode to “Star Trek.” The pilot revealed a show that can't seem to decide whether it's a comedy or a drama. Maybe it's neither, which might be why it drew a tepid total audience of 2.114 million in its last outing last Thursday.

One show that is not such a head-scratcher is “Marvel's Inhumans” on ABC. It's just straight-up awful. The other day, I saw a list that someone else put together for another Web site of the worst new fall shows, and they had “Marvel's Inhumans” in the No. 1 position. This show drew just 1.975 million viewers last Friday night.

I concur with the other list's opinion on “Inhumans,” although for me, there are other contenders vying for the top spot on that list.

One of them is “9JKL,” the vulgar and atrocious new sitcom on CBS about a nebbish New York man who lives in an apartment between his obnoxious parents' residence on one side and his jackass brother on the other side. The fact is, if I were doing my own list of the worst new fall shows, this one would be on top.

To give this apartment house comedy its due, it did draw 6.664 million viewers on Monday, October 16. However, its lead-in that evening -- “The Big Bang Theory” – had 13.075 million, which means nearly half of the “Big Bang” audience decided “9JKL” wasn't worth sticking around for.

The whole thing seems farfetched and forced. Its audience last Sunday was 7.701 million. Its lead-in, “60 Minutes,” had 14.58 million.

What else is on? Well, if you haven't yet seen the new comedy “Ghosted” on Fox, you're hardly alone. Just 2.712 million tuned in last Sunday night.

Of course, if you are the new “Dynasty” on CW, you would be envying the audience numbers for “Ghosted.” CW's most promoted new show, “Dynasty” drew just 918,000 viewers last Wednesday. It's also true that the CW has a great deal of tolerance for those sorts of numbers, since “Jane the Virgin” and “Crazy Ex-Girlfriend” did even worse last week.

What's succeeding this fall? “The Good Doctor” on ABC seems to have gained some traction. It drew 10.553 million viewers a week ago Monday (October 16) -- actually adding, not losing, viewers from its “Dancing With the Stars” lead-in.

However, ABC's well-meaning “Kevin (Probably) Saves the World” might not be able to save itself. Viewers don't seem to be flocking to this show's old-time religion. Just 3.263 million tuned in for “Kevin” a week ago Tuesday -- which is hardly a religious following.