Why Letterman's Beard Bugs Me 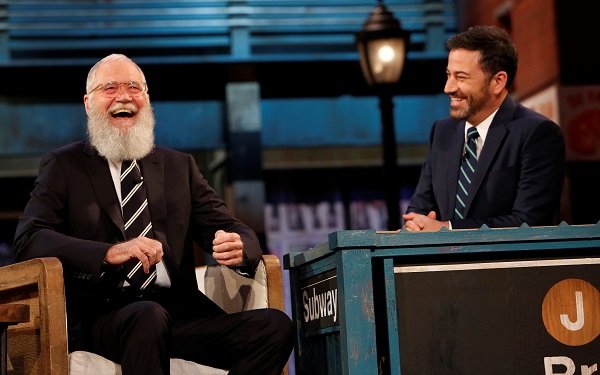 It's the elephant in the room every time David Letterman steps into the spotlight.

It's the bushy, gray beard that he apparently began cultivating immediately after he said good-bye to his CBS “Late Show” in May 2015.

Today, it billows out from the lower half of his face. It is well-rounded, fluffy, full-bodied and apparently well cared-for, at least publicly.

In the occasional TV appearances he makes, there is no sign of any food particles clinging to it, no random spittle and no creatures seen moving about within or on the surface of it.

It seems as if Letterman makes every effort to clean up this facial hair before going out in public. But at home? Who knows?

Sometimes, the beard does come up in conversation when Dave appears on TV. And maybe he has explained it from time to time. And yet it remains for me an object of fascination, mystery -- and dare I say it, revulsion.

Dave himself seems to recognize the oddity of this beard, and he’s not averse to joking about it. On “Jimmy Kimmel Live” originating from Brooklyn last Tuesday (October 17, photo above), Letterman referred to himself as “an aging vagrant.”

“I look like a Civil War statue!” conceded Letterman, 70.

To which Kimmel replied: “There's talk you might be removed!”

Letterman went on “Kimmel” ostensibly to promote the talk/interview program he is reportedly working on for Netflix. However, he revealed nothing about the show when questioned by Kimmel.

It was a rare appearance on TV for Letterman, whose only other appearances in the last few months have been on Turner Classic Movies discussing and helping to introduce some classic films in segments hosted by Alec Baldwin.

There, the presence of Dave's beard rendered all conversation about the evening's upcoming movie irrelevant and beside the point. It is difficult enough to listen to a non-expert pontificate on the cinema under the best of circumstances, but Letterman's beard presented a distraction that further undermined the whole thing.

Here is something they might have thought about for Dave's appearances on TCM: Have him introduce movies featuring some of Hollywood history's most famous bearded actors -- from Gabby Hayes to Al “Fuzzy” St. John.

Why am I fixated on this beard? First of all, I realize that there's nothing I can do about it. Also, I recognize that even writing about it represents an exercise in futility and irrelevance.

So please pardon me for making Letterman's beard the chosen subject of this TV Blog. It's Friday and I went for something a little more lighthearted than the usual screeds about what's wrong with the TV business today.

Where Dave and his beard are concerned, its growth so soon after he left TV makes it seem as if he was keeping a secret from us for all of those years -- namely, that he couldn't wait to leave and then give up shaving.

There were some instances during his long run in late-night in which he would come back from a vacation with a two- or three-week beard. He would then have a local barber come on the show to shave it off.

One of them was a man named Mickey Ballantine, who had a shop in a hotel on Seventh Avenue in the 50s (Jerry Orbach was one of his regular customers).

After I saw Mickey on Letterman's “Late Show,” I went to him for my own haircuts for about 15 years. So I suppose I have Letterman to thank for that.

Now that Dave is unapologetically letting himself go in the facial-hair area, we now realize that those televised shaves of long ago were a sham. Dave didn't really want those beards removed. Probably, he did so because he felt his job as a late-night host required that he be clean-shaven.

Generally speaking, that's still the case today, although Kimmel has a beard that he seems quite attached to.

As for Letterman, his beard not only resembles those seen on Civil War statues or in photographs of 19th-century presidents, but also those worn today by hipsters across the nation, from Brooklyn to Portland.

The next thing you know, aging hipster Dave will turn up on TV with his ears pierced and wearing a knit wool cap on his head -- indoors!

tv
1 comment about "Why Letterman's Beard Bugs Me".
Check to receive email when comments are posted.
Next story loading