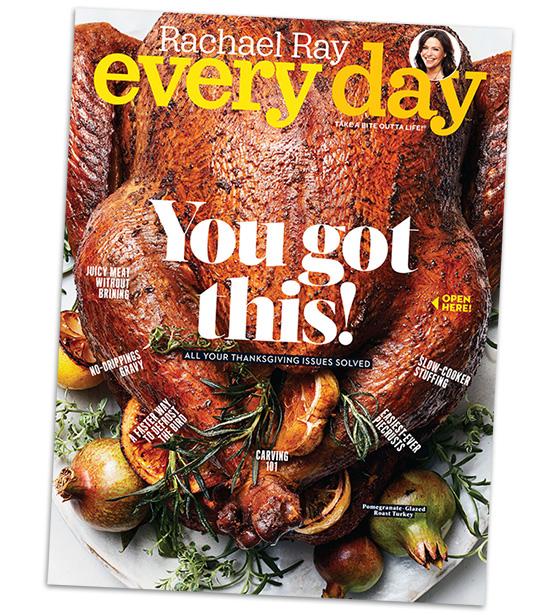 Just a few months into her role as the new editor in chief and content director of Rachael Ray Every Day, Lauren Iannotti is debuting a redesign of the magazine in the November 2017 issue.

“We studied feedback from readers, talked a lot with Rachael about the evolution of her brand, and followed the market — and then decided it was time for an update,” stated Iannotti.

“We were hearing from the readers and the market that [the magazine] felt dated, and we wanted to change that,” she added. The Meredith-owned publication hasn’t had an overhaul of the brand in about five years.

One of the priorities of the issue, and the revamp as a whole, was to incorporate more Rachael Ray into the editorial. A new section called “On Our Radar,” for example, highlights trends and products Ray “is excited about,” like chickpea vegan mayo and a line of comfy clothes she loves.  (The issue hits newsstands October 24.)

“The way we talk to readers has changed in print,” Iannotti said. “We no longer want to talk down to readers … We really wanted to take down the fourth wall and just have a conversation and talk directly to the reader and not be bossy.”

One way of achieving this is taking puns out of headlines. The cover line of the November, Thanksgiving-themed issue is “You got this,” which Iannotti called a “wink to the reader.”

“We know where your head is right now to cook this giant feast. We are your cheerleader, your bud. A clear headline that talks to the reader is so much more powerful and draws [the reader] in, rather than a pun-ny headline,” a lesson she learned working with Cindi Leive, former editor in chief of Glamour.

The cover, which zooms in on a large, bronze Thanksgiving turkey, features a unique, double die-cut ad unit from Swanson. Stevia sponsored a pull-out booklet of six baking recipes, as well.

Sections have been renamed to “Real Food” and “Real Life,” as a nod to the magazine shifting to be more “authentic.”

One iteration of “Real Life” features bargain and thrift-store finds. “Real Food” will show readers how to make their own everything spice mix and ways to use it.

Iannotti said she wants the recipes in Rachael Ray Every Day to look simple, delicious and real, but “not perfect.” The food should look like they can be made “fast.”

“I’m a mother of two who works in a pretty demanding job,” Iannotti said. “I want the recipes to be something I could pull off.”

It all boils down to trying to update the magazine to be “cooler. This is not a big plot to get millennials,” Iannotti was quick to note. “We redesigned to appeal to new audiences, while not alienating the audiences we already have.”

While there won’t be any immediate changes to Rachael Ray Every Day’s website, gradual updates will roll out on its digital platforms in the coming months.