Brand safety concerns are having an impact on programmatic buys. According to ad tracker MediaRadar the number of brands running programmatic ads this year from January through July dropped 2% compared to the same period a year ago.

Both Procter & Gamble and Unilever are increasing their presence in high-CPM digital formats after concerns over their brand safety grew earlier this year, according to new data from MediaRadar. 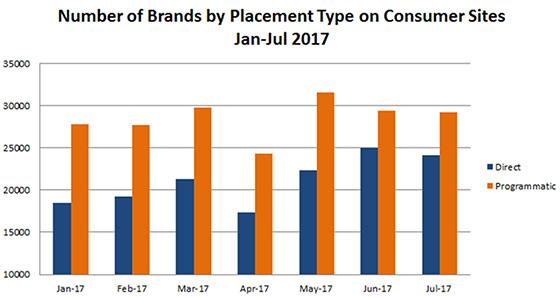 The percentage of P&G brands running high-CPM ads -- premium video and native - -increased 27% after a report in April revealed that some ads for well-known products and companies were mistakenly running next to neo-Nazi and ISIS content on YouTube.

From January to March, P&G had 49 brands running premium video and native ads. That number jumped to 62 brands in the post-YouTube scandal period from May through July.

Similarly, Unilever expanded its direct ad buys from 25 of its brands in January-March to 53 in May-July, a 112% jump during the same time frame.

Why the change? Direct sales are generally seen as brand-safe bets versus programmatic and automated buys, says MediaRadar. "As advertisers increasingly change tactics and strategies given brand safety concerns, it’s important for agencies to stay ahead of what’s occurring.”

MediaRadar’s AI software tracks and analyzes advertising campaigns for millions of brands across an array of media channels including online, print and TV.

“Everyone is talking about transparency and brand safety,” says Todd Krizelman, CEO & co-founder, MediaRadar. “In the quest for it, many of the world’s largest advertisers are shifting ad spend, and now spreading it across more than a dozen different media formats."