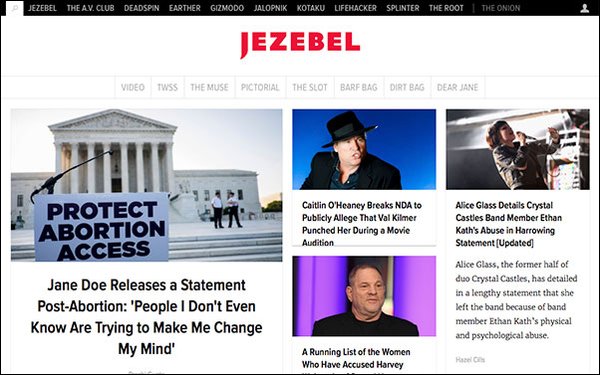 Koa Beck, a former executive editor at Vogue.com, is the new editor-in-chief of Jezebel, the feminist site founded under the now-defunct Gawker Media, celebrating its 10th anniversary this month.

“To be at the helm of the enterprise at which I first read the words ‘rape culture’ and ‘fat shaming’ on the internet is very meaningful to me,” Beck told The New York Times. “I have high hopes of where I can take that legacy in a Trump administration, in which so many rights of the marginalized are now being actively eroded.”

Beck replaces Emma Carmichael, who stepped down in July after three years at the helm of the site. Carmichael has since served as consulting editor while Jezebel searched for a new candidate to take the chair.

Beck previously worked as senior features editor at MarieClaire.com and has written for The Atlantic, The Observer and The Guardian.

Jezebel is now part of Gizmodo Media, an umbrella that includes most of Gawker Media’s former brands, except for Gawker itself. Univision's Fusion Media Group bought Gawker Media last year, after it filed for bankruptcy, following a $135 million lawsuit brought by Hulk Hogan.

Beck, who is biracial and married to a woman, according to the NYT, is at least the second queer woman of color to take charge of a leading publication in the last year.

In December, Lydia Polgreen, the former editorial director of NYT Global at the NYT, was tapped to become the next editor-in-chief of HuffPost, replacing cofounder Arianna Huffington.