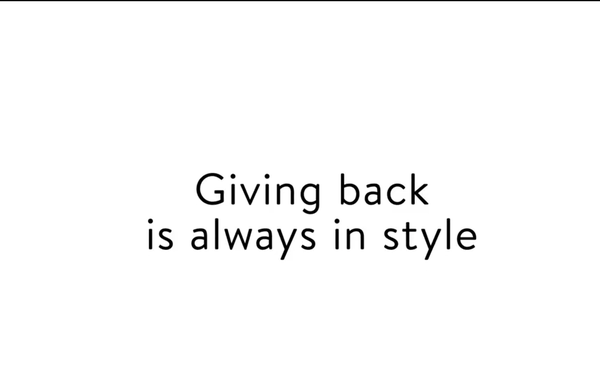 While retailers generally step up their cause-marketing efforts as the calendar inches closer to the holidays, Nordstrom and Kohl’s are both shaking up their usual approach.

Nordstrom is teaming up with the nonprofit Give Back Box to make clothing donation easier, and at the same time, help keep used clothing out of landfills. The deal couldn’t be simpler: After receiving a package from Nordstrom, customers then fill the empty box with as many clean, gently used apparel and accessories as they can, then print out a label for free shipping. The packages are then directed to local nonprofits, which sell the items to help their programs. The Seattle-based retailer also says it is testing in-store donation programs in its six of its western Washington Nordstrom stores, with donations going local Goodwill organizations.

Give Back Box, which launched back in 2012 with the mission of reducing the 11 million tons of textiles Americans heave into landfills each year as well as helping those less fortunate, already partners with the likes of Amazon, Overstock and REI.

And Kohl’s just announced an $800,000 gift to kick off its new Mission: Healthy Kids program, in partnership with the Children's Hospital of Wisconsin. While it’s donated extensively to the hospital before, this new two-year effort is aimed at raising awareness about healthy eating and active living. The statewide initiative aims to promote policy and systems changes through health education programming.

Funding for the gift comes from Kohl’s ongoing Kohl’s Cares merchandise, which raises money by selling $5 books and toys. So far, it’s generated over $317 million through this merchandise program, and since 2000, donated more than $90 million to charitable initiatives in the metro-Milwaukee area.

Meanwhile, Macy’s is running its tried-and-true coat drive, with the fifth year of the “Buy a Coat & We’ll Donate One” partnership with Clothes4Soul. For every coat sold through Oct. 29, either in store or online, it donates one new coat. Since the 2013 launch, it’s given away 165,000 new items, valued at $6.6 million.

While the so-called “Giving Season” is critical for nonprofits, with many receiving the majority of their donations in November and December, it’s also a way retailers try to differentiate themselves from one another, with signature events like Macy’s “Believe” campaign for children and the Home Depot’s commitment to veterans.

Research published earlier this year finds appealing to shoppers’ generosity may even boost sales at the register, especially for luxury items. Marketing professors from Boston College and the University of Houston devised a series of experiments revealing that association with a charitable effort made people more likely to choose a premium brand over a value option, suggesting that giving eases the guilt of people who are looking for a reason to indulge.