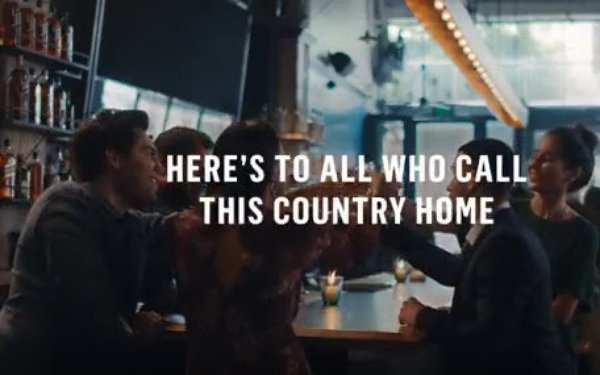 Johnnie Walker is continuing its tributes to immigrants and diversity with a new 30-second TV spot dubbed “Citizenship.”

The ad (below) shows a young professional taking his citizenship test, followed by he and his friends toasting his success with Johnnie Walker.

The ad is the centerpiece of the latest iteration of the blended whiskey brand’s year-old, diversity-themed “Keep Walking America” campaign, from Anomoly.

New citizens were offered a photo to mark the event, via a pop-up portrait studio manned by local photographer Castro Frank, whose parents are immigrants.

Some were interviewed by Valderrama about their journeys to citizenship and what it means to them.

The event also featured a live performance by L.A.-based soul band Chicano Batman of their interpretation of Woody Guthrie’s classic song “This Land Is Your Land,” which was used in the creative for the launch of “Keep Walking America.”

Johnnie Walker’s video of the band performing the song has pulled nearly 1.4 million views on YouTube since it was posted in mid January this year.

The song’s lyrics were also spoken in “This Land,” the anthem ad for the “Keep Walking America” launch during last November’s first week. That video has generated more than a million views on YouTube since it was posted.