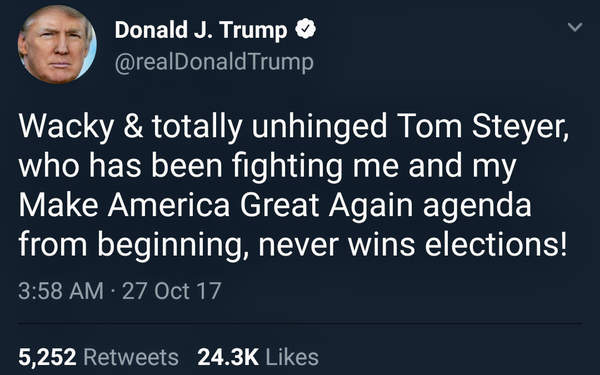 In an apparent attempt to delegitimize a paid ad campaign calling for his impeachment, President Donald J. Trump actually drew attention to it by tweeting it to his legions of Twitter followers.

“Wacky & totally unhinged Tom Steyer, who has been fighting me and my Make America Great Again agenda from beginning, never wins elections!” Trump tweeted Friday morning in response to a multi-million paid ad campaign launched earlier this week by billionaire Tom Steyer calling for President Trump’s impeachment and encouraging viewers to sign a petition at NeedToImpeach.com.

"A Republican Congress once impeached a President for far less. And today, people in Congress and his own administration know that this President is a clear and present danger who is mentally unstable and armed with nuclear weapons," Steyer says in the ad, which reportedly is backed by a $10 million media buy, but is also available on YouTube and shared on social media outlets.

The buy, which has been concentrated on broadcast TV stations in New York and California, as well as on national cable networks, included an airing on President Trump’s favorite TV show, Fox News’ “Fox and Friends,” which apparently prompted his tweet Friday morning.

“During the Oct. 27 edition of Fox News’ morning show, Fox ran an ad at 6:14 a.m. by philanthropist and progressive activist Tom Steyer, who is spending $10 million on an impeachment effort, in which Steyer characterized Trump as “a clear and present danger” and called for “elected officials [to] take a stand on impeachment,” Media Matters Researcher Nick Fernandez reported this morning, noting, “Other tweets from the president suggested he was tweeting along with ‘Fox & Friends’ while watching the program on about an hour delay. About one minute after lashing out at Steyer, Trump tweeted his thanks to Fox & Friends for the ‘really great job and show.’”

The tweet effectively breaks a long-held principle in brand marketing to avoid acknowledging -- much less drawing attention -- to a challenger brand.