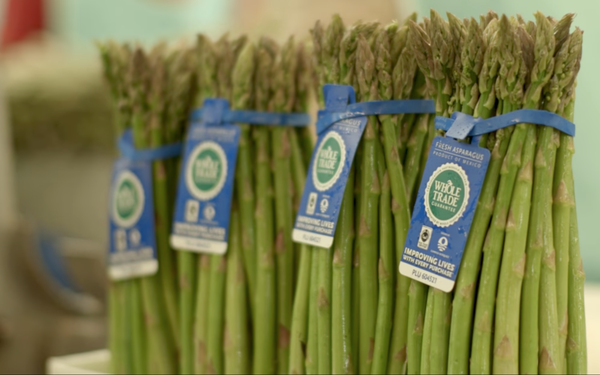 Amazon delighted investors with strong numbers for the quarter, with profits beating expectations and sales jumping 34%. But some analysts believe the honeymoon between Amazon and the recently-acquired Whole Foods Market may be ending, with signs of a clash between the two corporate cultures beginning to emerge.

For the third quarter, the Seattle-based Amazon says sales rose to $43.7 billion, compared with $32.7 billion in the comparable quarter of last year. That includes $1.3 billion from Whole Foods. Without those revenues, Amazon’s sales gain would be 29%.

Operating income sank 40% to $347 million, and net income rose to $256 million, far above analysts’ expectations. (Amazon often chooses to reinvest in operations, and many predicted the company would do so this quarter, as well.) Even more heartening, it offered a rosier outlook for the fourth quarter and says it expects sales to come in between $56 billion and $60.5 billion, or between 28% and 38%. And it forecasts operating income between $300 million and $1.65 billion, compared with $1.3 billion in the same period a year ago.

As is typical for the retailing giant, it took the earnings report as an opportunity to spotlight achievements, including three new Echo devices, five new Alexa-enabled devices, teaching Alexa to distinguish between two voices, and improvements in its AWS division. It called out its move to quickly lower prices in many Whole Foods items once the merger became official in August, to help counter the high prices that make many people balk at the grocery chain.

Karen Short, an analyst who follows Amazon for Barclays, has been keeping close tabs on changes in Whole Foods stores since the merger, “given the widespread concern that food retail will be 'Amazon’ed,'” she writes in her most recent report. She says that CEO John Mackey’s recent comments at an industry event may signal “that the culture clash between Amazon and Whole Foods has been challenging so far.” And reports that Mackey and other Whole Foods execs are scheduled to attend a retreat meant to bring them in line with Amazon thinking “could be an indication that integration is occurring at a slower-than-expected pace or that his tenure at the combined entity could be short-lived. It seems unlikely that Amazon would view favorably Mackey’s decision to publicize internal strife.”

Whole Foods, however, says this is not the case. “Reports of John Mackey’s comments ... regarding the joining of cultures with Amazon are inaccurate,” a Whole Foods spokesperson tells Marketing Daily, via email. “Mackey believes Amazon is the perfect partner for Whole Foods Market. He and the company are excited about what has already been accomplished in the short time since the merger, and the leadership teams of both Whole Foods Market and Amazon are aligned and energized about combining the expertise and strengths of our companies to create the best possible customer experience.”

Short believes that Whole Foods’ food innovation cycle is likely to slow as the two companies further integrate, and that if Whole Foods becomes more like conventional food stores, may even come to a halt, while competitors — most notably Trader Joe’s — continue to become more innovative.

She also notes that there seems to be no change in the number of “New Lower Price” reduction price tags, which may indicate there have been no new investments in lower pricing. And an increase in items tagged “Local” might mean Amazon is experimenting to see whether that designation may be as powerful a sales driver as a lower price. She also points out an increase in Amazon lockers inside the Whole Foods stores she’s monitoring, expected to be a key component of the integration of Amazon Fresh, Amazon’s pre-existing grocery delivery program, and the Whole Foods shopper.

Neil Saunders, managing director of GlobalData Retail, says it’s still too early to say whether the Whole Foods acquisition is a success story. “However, initial signs are encouraging, and our data show some very slight movements on price perception,” he writes in his report on Amazon earnings. “These are not dramatic, but they are a step in the right direction and show that Amazon's approach is being noticed by consumers.” Over time, he expects Amazon to “make some more radical changes that will deliver stronger results.”