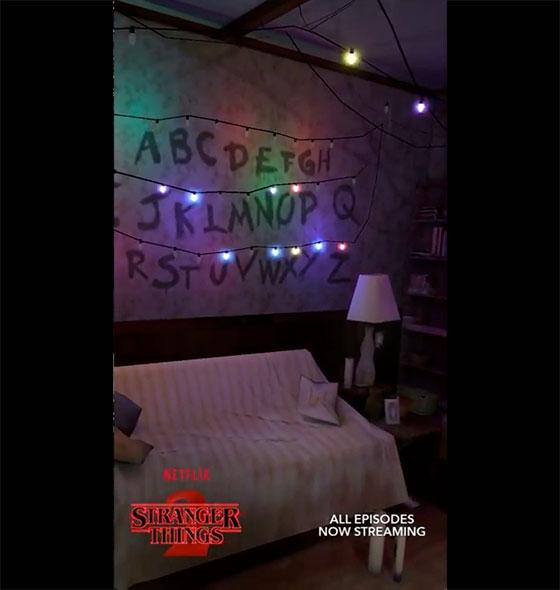 Like the Upside Down in “Stranger Things,” do you believe in alternate, parallel dimensions? Well, to promote season two of the Netflix sci-fi sensation, Snap is making such worlds a virtual reality.

In what Snap is calling a first-of-its-kind 3D World Lens, consumers can use their smartphones to virtually pass through a portal, and enter a strange room that should be recognizable to fans of the show.

In another first for Snap, people will be able to unlock the “Stranger Things” portal Lens by using Shazam when the show’s theme song plays.

As part of the campaign, Snap is also offering Snapchat users a face Lens that will simulate nosebleeds -- just like the ones that plague the show’s protagonist, Eleven.

Giving brands a sense of the ad’s possibilities, Warner Bros. and Bud Light showed off their 3D World Lenses in late September. Bud’s ad featured a ballpark beer vendor who has “Buuuuuuud Light, here” for anyone in the real-world environment in which he’s placed.

While portals and other 3D World Lens rely on what Snap considers to be “groundbreaking new technology,” the ads require relatively little time to create. All done in-house, Snap says they take about six weeks for any iteration, including a full face and 3D World Lens.

Snap is not saying how much the ads cost brand partners.

This past May, Snap began offering advertisers a basic outward-facing Lens capability, limited to floating objects and atmospheric effects. Now, objects -- from a beer guy to a flying car -- can be more precisely integrated into environments. They also recognize surfaces. Once locked in place, viewers can actually walk toward, away and around them.