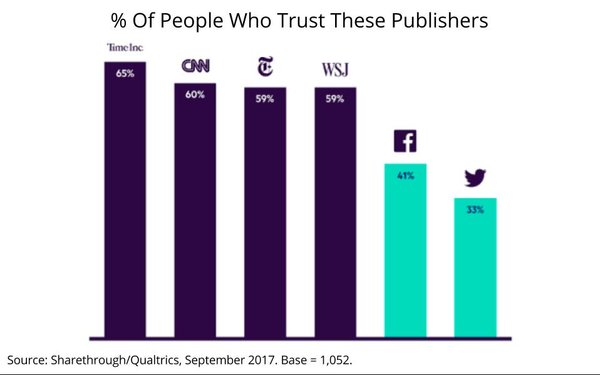 More Americans may be getting their news from social media platforms like Facebook and Twitter than ever before, but most of them don’t trust it, according to results of a national survey released this morning.

The study released by Sharethrough and Qualtrics, which surveyed more than 1,000 Americans, found that only a third of Americans trust news accessed via Twitter and only two out of five trust it from Facebook.

By contrast, most Americans still have a high degree of trust for news published by established legacy news organizations, including Time Inc. (65%), CNN (60%), The New York Times and The Wall Street Journal (59%).

The findings come at a time of increased focus on the role of social media networks in spreading disinformation and propaganda from Russian operatives -- both organic and paid. While the actual influence of those impressions may not be ascertainable, the amount of time spent by Americans accessing news from social media far outstrips the amount of time they spend accessing it directly from legitimate news publishers.

“More than two-thirds (69%) of people surveyed said they checked Facebook at least weekly, showing more active engagement than CNN and Fox News, the two premium publishers with the highest engagement rates. When users visit Facebook, they are spending substantial time there -- 39% spend more than 30 minutes, compared to just 17% who spend that same amount on The New York Times,” the study found. 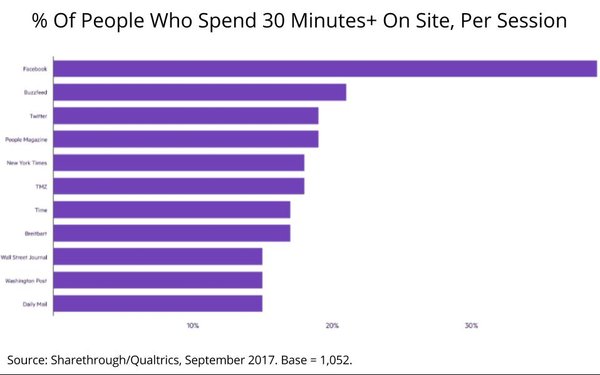