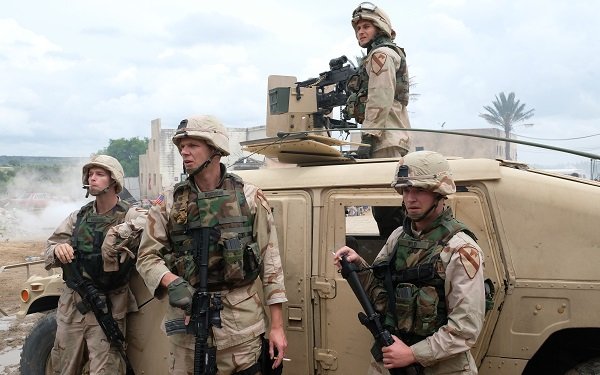 That's a question the folks at National Geographic are no doubt wondering about as the premiere date approaches for their ambitious eight-part dramatization of the Iraq War called “The Long Road Home.”

This “global event series” -- as the network grandly positions it -- was promoted on Fox throughout the American League Championship Series (which the Yankees lost to the Astros) and the World Series won by the Astros on Wednesday.

The Fox network and National Geographic (which no longer has the word “Channel” in its name) are both owned by the same company.

“The Long Road Home” has been the sponsor of at least some of the games’ pre- and post-game shows -- the ones featuring the panel of Alex Rodriguez, Keith Hernandez, David “Big Papi” Ortiz and Frank “Big Hurt” Thomas.

Many who have watched the shows sponsored by this miniseries might still have questions about what it is. Since it is on the decidedly documentary-heavy NatGeo, many might not even realize it is a scripted dramatization and not a documentary.

Whether or not the promotion during the baseball telecasts will drive viewership will not be known until some time after this series airs.

It starts with a two-hour opener next Tuesday (November 7) and continues after that with seven one-hour episodes on seven consecutive Tuesday nights.

A look at the two-hour premiere -- which I previewed this week -- reveals a very high-quality, cinematic made-for-TV production.

The show is about U.S. soldiers from Fort Hood, Texas, and their experiences in the battle for Sadr City (a section of Baghdad) in April 2004. The miniseries is based on a book by Martha Raddatz of ABC News.

The miniseries has the soldiers going off to war, engaging with the enemy and then coming home. In the real-life fighting that month, eight of them would die in Sadr City. Sixty-five would be seriously wounded.

The miniseries also shows the spouses of the warriors at home as they await word on their husbands, and worry about how they are faring in the war zone. The cast includes Sarah Wayne Callies from “The Walking Dead,” Jeremy Sisto and Jason Ritter (also seen this fall in the new ABC series “Kevin (Probably) Saves the World”).

In the two-hour premiere, the battle scenes are effectively rendered and undeniably suspenseful. The miniseries covers most, if not all, of the bases.

There are brave soldiers, veterans and newbies. On the Iraq side, there are fighters battling the Americans, ordinary people trying to live their lives in a battle zone, and some Iraqis siding with the Americans such as a platoon translator who is rewarded for risking his life and the lives of his family members by being accused by at least one American sergeant of colluding with the enemy.

In this day and age, it is hard to determine if sufficient numbers of people will stick with this miniseries for eight Tuesdays to make it worthwhile for NatGeo.

Anyone who does stick with it will be rewarded by a well-made miniseries about modern warfare. It's a subject that has been covered before in movies and TV shows, but this one is still very good and well worth sampling.

The thing is, people don’t expect these kinds of original “limited” or “event” series from the likes of NatGeo. If this was on HBO, FX or Netflix, it would probably be a sensation -- particularly among so-called critics who sometimes write as if they are part of the publicity staff at those three programming services and a handful of others.

Whether or not it draws viewers, NatGeo is to be given credit for allocating the formidable resources it apparently required to make it. It is a great miniseries or, if you prefer, a great “limited” series or a great “global event” series.