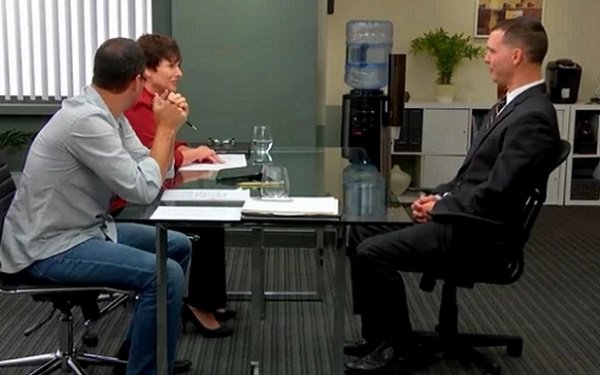 This is just a great idea for a reality show: Real job candidates going through the interview process, after which one of them will get the job.

Who can't relate to that? Answer: Nobody.

We've all been there -- done the interviews, gotten the phone calls afterwards (or not), and have heard either a yes or a no from the person on the other end of the call. Something we can all agree on: Yes is better.

It really is as close to a universal experience as reality TV can get. And this small half-hour show -- “The Job Interview” (great title -- succinct and to the point) premiering next Wednesday night on CNBC -- gets it just right.

On the show, you will see a pair of business owners interviewing prospects for an open job. In the series premiere, prospects are being interviewed by two business partners for work in a small accounting firm in Fort Lauderdale. The bookkeeping job pays $35,000 to $45,000 per year.

In the second of the two episodes, a woman who started a small wine business in Chicago is seeking a $40,000-a-year brand ambassador. She interviews the prospects with help from a friend who is the wine firm's publicist.

The interviews have everything anyone will recognize from their own job interview experiences: The nervousness, the small surprise tests (such as an accounting test that really separates the qualified from the unqualified) and the occasional questions out of left field that you never expect.

For example, in one of the interviews, a prospect is asked, “What would your pet say about you if we asked it for a reference?”

What are you supposed to say? I don't know -- I ask my dog all time what he (or she) thinks of me and I never get an answer I can understand. The woman who is asked this question merely looks at her interviewers blankly and answers: “I don't have a pet.”

There are miscues aplenty as the applicants -- all of whom are sincere in their desire to obtain these jobs -- succeed at some answers and fail dismally at other ones.

No one is caught in an out-and-out lie in the two episodes CNBC provided for preview, even though an Associated Press/CNBC poll found that 28% of job applicants say they have lied or exaggerated aspects of their career histories in job interviews.

The poll, conducted to coincide with the debut of the TV show, also uncovered some interesting data about how nervous people can be in job-interview situations.

For example, 28% said they have forgotten their interviewer's name during an interview, 15% said they sweated profusely and 4% said they had food stuck in their teeth.

At the end of the half-hour show, phone calls are made to the applicants who got the jobs, and the ones who didn't. The “no” phone calls are as tough to watch on this show as they are to receive in real life.

And the “yes” calls are as joyously received as these calls are when they really happen too.

Since the first “Real World” seasons in the 1990s and the debut of “Survivor” on CBS in 2000, I have been watching and reviewing reality TV shows for nearly 20 years.

With its straight-ahead title and subject matter that is universally relatable -- and production values at a very high level for such a simple concept -- I am not exaggerating when I say that this show is one of the best reality TV shows I have ever had the pleasure of reviewing.

May it enjoy a long career and a prosperous future.

“The Job Interview” premieres Wednesday, November 8, with two back-to-back episodes at 10 p.m. and 10:30 Eastern on CNBC.

1 comment about "TV Critic To New 'Job Interview' Show: You're Hired!".
Check to receive email when comments are posted.
Next story loading