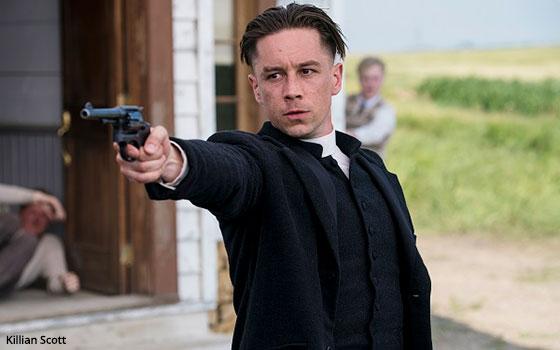 The basic elements of effective storytelling take a holiday in a new drama coming to USA Network this week.

It is called “Damnation,” and it is a Depression Era dramatic series that takes itself so seriously that you won't know whether to laugh or cry. The former is more likely.

This show purports to be about the cultural undercurrents of the era (specifically, the time and place are Iowa in 1931).

As the show opens, a group of farmers are on strike, which in their case is a protest action that involves withholding the foodstuffs they produce (crops, dairy products etc.) from the markets in town. In this way, they somehow hope to bring the merchant and banker class of the town to heel.

This is in response to some sort of evil-doing on the bankers' parts. It is not entirely clear what that is, except that it seems to be implied that the bankers are paying off this or that official for … well, what, I don't really know.

The end result of their actions, whatever they may be, will be to drive the farmers out of business. Well, maybe yes or maybe no.

For the makers of this show, it is sufficient merely to show a banker using a stern, “evil,” vaguely threatening tone of voice on the telephone for us to know he is a baddie.

And since it's the Depression, and there are farmers involved, then we are all supposed to accept the equation that all bankers of the era were bad and all farmers were good.

For me, the entire premiere episode, which I watched last week, was like this. Everything was a cliché, and nothing seemed authentic, right down to the show’s concept, which seemed derived from other shows.

These include “Carnivale” on HBO, a Depression Era drama that was one of the most unsung of the great shows of the now-fading Golden Age of Television of the early and mid-’00s; and “Preacher” on AMC, which, like “Damnation,” features a fake minister as its main character. Let the record show that the TV Land comedy called “Impastor” also features a fake clergyman.

How inauthentic is “Damnation”? In one scene, while delivering a sermon that he hoped would fire up the townsfolk to go to war against the county's evil classes, the preacher used the f-word.

And then, his entranced flock began to use it too, signaling to we viewers that the sermon achieved its desired effect. In reality, the writing of this sermon was poor, and the scene was ridiculous.

In another implausible scene, a hired gunman shot another man dead and then faced off against a dozen or more armed men who could have (and should have) blown about 50 holes in him right then and there. But for reasons unknown, they did not.

The gunman then carried the dead man's body all over town, and no one took any shots at the gunman there either.

Among the characters in “Damnation” is a blonde, female sniper who supposedly works for a large detective agency. She looks so much like another blonde character in the show (the fake preacher's wife) that it may take you most of the hour to figure out who's who.

Memo to the people who cast this show: Don't cast actors who look alike, unless you're going to make them siblings or something.

As a matter of fact, there are two characters who are revealed to be siblings -- brothers, in fact -- in a plot “twist” revealed near the end of the premiere episode that, if you are like me, you will have already seen coming. And by the way? It adds nothing to the story.

The list of clichés and storytelling faux pas in my notes is pretty lengthy. I will refrain from reporting any more of them here because I think the point is made.

I wish “Damnation” had been better because I do like period dramas, particularly when they depict the 1930s. But this show was needlessly violent, vulgar and perhaps worst of all, inept.