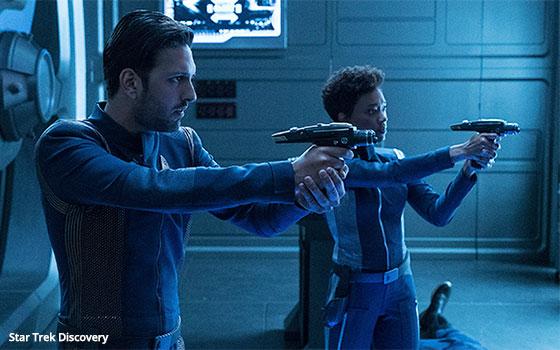 “Not only are we not affected, as others are, by cord-cutting -- it has a real, measurable upside for us,” Moonves argued.

His reason for optimism? CBS All Access, the network’s streaming video service. The service, which offers a library of thousands of shows, a live feed of local CBS stations and original content like “Star Trek: Discovery,” is on track to have around two million paying subscribers by the end of this year, Moonves said on the company’s second-quarter earnings call in August.

The launch of the new "Star Trek" drove the biggest single day of sign-ups for the service in its history, according to the network, which now plans to start selling a version of the service in overseas markets.

Overall, CBS saw its revenue rise in the third quarter, even as advertising revenue fell year-over-year.

"'Star Trek: Discovery' has been a huge boon for CBS,” said Andrew Hare, VP of research for Magid, in an interview with Digital News Daily. “If you look at CBS All Access, they say they had a 200% subscriber base increase in September and October, driven by this show. I think when you are starting to figure out the secret sauce in this space, you need to be rolling out content all the time, and a lot of it has to be high-quality and original.”

“They have very high engagement numbers, and high viewing hours per day, and that is to be expected,” Hare said. "In some ways the more niche a service goes, the more affinity is in that service. If it has programming you really really like, or is around a topic you are really really into, you are more likely in some cases to watch more of that."

CBS All Access has found its groove by targeting younger men with shows like “Star Trek” and the upcoming “No Activity.” On Thursday, the company announced that it would be rebooting “The Twilight Zone” for the service, in a show produced by filmmaker and comedian Jordan Peele.

By offering niche shows alongside its more broadly appealing broadcast programming, CBS is betting that it can take on some of the biggest players in the OTT space. So far, at least, the bet appears to be paying off. CBS says the average All Access viewer is 20 years younger than the average viewer of the broadcast network.

“The kinds of programming that's on All Access will probably be somewhat more premium, let's say, than it would be on CBS,” Moonves said Thursday. “We are spending more on the product. We don't need as mass an audience as we may do on CBS, but it needs to be more specialized. It needs to stand out quite a bit.”