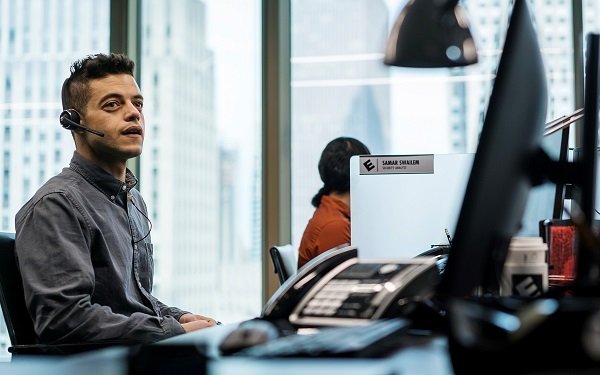 An episode of “Mr. Robot” on USA Network last week demonstrated how far TV has come in its adoption of cinematic production qualities.

At the same time, the episode -- executed in what looked to be a single take (or a very convincing facsimile thereof) -- illustrated the pitfalls of producing TV shows such as this one for a network that is ad-supported.

As it happened, this episode ran without commercial interruptions on USA. For an episode of television that is as fluid as this one was, interrupting it for commercials would not have worked at all. Credit goes to whoever made the decision to let this one run commercial-free.

However, if every show on ad-supported TV were made like this, commercials would not be compatible with them. This episode -- the fifth of the show’s current third season that got underway last month -- was exceptional.

The episode had the show's principal character -- the mysterious computer-hacking wiz Elliot Alderson (played by Rami Malek) -– attempting to elude security personnel and an HR representative who wished to dismiss him from the company he worked for and escort him from the building.

A series of sequences in which Elliot basically hid from his own company within the company was a very effective commentary on contemporary workplaces and the anonymous cubicle culture they engender.

Among other tactics, he strolled into a glassed-off conference room where a meeting was about to get underway and claimed to be confused about this space’s room number. He was asked to leave, but he stayed anyway, flummoxing the meeting’s leader and its participants.

Even the brilliant Elliot was derailed in his evasion plan when he spied an older employee -- a woman who may have been in her 50s or 60s -- whose cubicle he wanted to “borrow.”

Using the pretense that he was from tech support and needed to perform a series of diagnostic tests on her PC, he was confident, based on her age, that she would acquiesce and vacate her space for him.

But she didn't. Instead, she revealed that she knew as much about the company's computer security and firewall software as he did -- a level of expertise that came as a big surprise to him.

The single-camera, single-take technique was used throughout the episode. Based on a handful of stories online about the episode, it is not entirely clear whether the entire 44-minute show was actually captured in a single take.

It certainly looked as if it was, however, so if it was not, the edits and cuts were not detectable. To achieve this effect, the camera swooped and turned in sync with the reactions and visual sight lines of various characters -- mostly Elliot but others too.

The long “single take” without edits is something that is used rarely enough in filmmaking that when it is applied, it makes an impression. A number of famous movie sequences rendered this way come to mind -- including the opening sequence of “Touch of Evil” (1958, Orson Welles), the kid on a Big Wheel in “The Shining” (1980, Stanley Kubrick), the Copacabana sequence in “Goodfellas” (1990, Martin Scorsese) and the opening sequence of “The Player” (1992, Robert Altman).

It is quite an achievement to stretch this technique to 44 minutes. If this is what the makers of “Mr. Robot” were able to do, then hats off to them.

The best thing about the episode is that the single-take gambit did not play like a gimmick. It was, in fact, a very effective way to tell the episode’s story.

It doesn't happen frequently, but over the years, TV has sometimes shown flashes of creativity and ambition like this. When it happens, it is great to see -- and worth pointing out too.