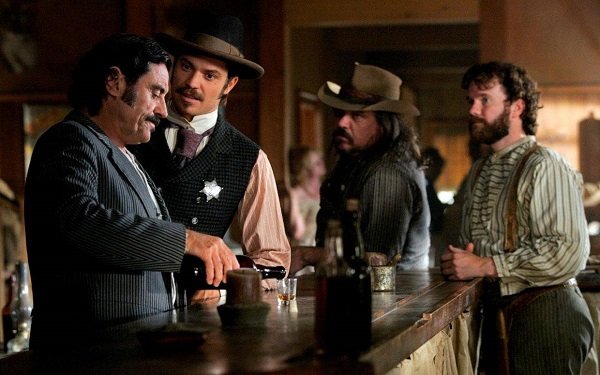 If some sort of continuation of “Deadwood” actually comes to HBO next year, then it will be more than 10 years since it was last promised.

“Deadwood” fans are no doubt excited by this news, which suddenly appeared on various entertainment-trade sites and elsewhere over the weekend.

However, if previous experience is any guide, the TV Blog counsels against holding one's breath waiting for this to happen.

In addition, the historical record for remakes, reboots and updates of old TV shows is checkered to say the least. Who’s to say that a return to “Deadwood” will accomplish anything other than revealing how much everyone has aged since we last saw them?

The stories about a “Deadwood” arrival -- such as this one on Deadline.com -- indicate that this “Deadwood” revival will more likely come in the form of a follow-up made-for-TV movie than as a full-fledged fourth season of the series.

The stories say “Deadwood” creator and principal writer David Milch wrote a script for a movie that is under consideration by HBO, the original series’ home from 2004-06. If the movie ever gets made, the stories say it will air next year.

To long-time “Deadwood” fans, this tune sounds familiar. Back in 2006, as the third season was just getting ready to start, HBO announced there would be no fourth season.

The timing of the announcement took some of the air out of the excitement and anticipation for the new season, which turned out to be as superlative as the previous two.

HBO's decision to pull the plug didn't play well with the show's fan base, mainly because it appeared to stem from straight-up financial considerations and not about the quality of the show itself.

At the time, the indications were that HBO had decided to divert the money it might have invested in a fourth season of “Deadwood” into other series then in development.

Perhaps to deflect some of the criticism from disappointed HBO subscribers who then vowed to cancel their subscriptions, HBO promised (or seemed to promise) that it would produce one or possibly two follow-up “movies” (actually two-hour episodes) that together would serve as a finale for “Deadwood.”

Back then, there was some expectation that these movies would turn up on HBO in 2008. They never materialized, however. And in the meantime, Milch made a series about a surfing family called “John from Cincinnati” for HBO that lasted just one season. After that, HBO and Milch seemed to be done with each other.

To make this new rumored “Deadwood” movie, HBO and Milch will have to find and sign up many of the show's former cast members.

The stories about the show's revival say the time frame for this new movie will likely be 1879, the year a catastrophic fire swept through the town of Deadwood.

If that is the case, then that year means three years have gone by in the world of “Deadwood” since it got underway in 1876. But for the characters and actors who play them, 12 years will have passed between the last time they were filmed and next year's possible airing of this new movie.

The way these characters might look could provide a distraction to the experience of watching them in their old roles, although Hollywood does have various tricks to compensate for that.

The bigger risk is that a new “Deadwood” simply won't measure up to the pleasures of the old one.

For true fans of “Deadwood” (or any other show that gets revived this many years after it was last seen), any perceptible decline in the show's quality -- real or imagined -- from a dozen years ago will be even more disappointing than the show's surprise cancellation in spring 2006.

tv
1 comment about "Skepticism Greets Rumors Of A 'Deadwood' Revival".
Check to receive email when comments are posted.
Next story loading