You Must Remember This: They're Making A New 'Roseanne' 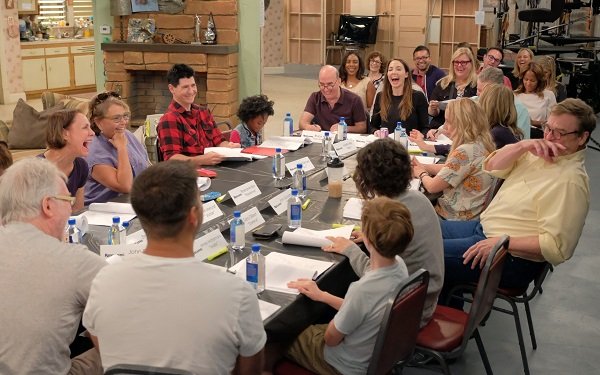 In case you forgot, ABC is making a new “Roseanne.”

The news surrounding this epic reboot has been surprisingly scanty. Among other tidbits not yet made public is the show's premiere date. An ABC spokesman says the date will be announced soon. It will likely be a midseason premiere early in the new year.

The last (and only) communique about the new “Roseanne” from the ABC publicity department was issued on October 17. The release reported that the cast, writers and producers had convened on a sound stage for the new show’s first table read. As the kids are fond of saying today: Yay.

The picture above is from this momentous table read. It's the only photo from the new “Roseanne” that a columnist can find on the ABC press Web site. There are a slew of photos from the old “Roseanne” there, however.

In the table-read photo, the cast seems to be really enjoying themselves, although that could be fake since these people are actors -- and at least some of them are really good at it.

One thing I noticed: John Goodman looks as if he has taken off a few pounds. He looks great. Way to go, John.

Table reads are not really very interesting, but those of us curious about how this “Roseanne” revival is proceeding will have to take what we can get.

Another story about the new “Roseanne” suddenly appeared the other day in the trades. On the Hollywood Reporter Web site, the story's headline made it seem more newsworthy than it actually was.

“ ‘Roseanne’ revival order extended at ABC,” the headline said. A look at the story revealed that this “extension” amounted to just one additional episode -- bringing the show’s initial order to nine. Yay again.

When the premiere date for this new “Roseanne” becomes known and then draws nearer, you can expect the p.r. campaign to rev up a bit. Look for cast members -- starting with Roseanne herself -- to make the talk-show rounds and get interviewed in the celebrity magazines.

The New York Times will do a predictable feature on the show that will attempt to examine it in some sort of cultural context. This feature -- most likely to appear on a Sunday -- will be very long, full of details, and very dull -- just like all Times features and stories about TV.

Hopefully, Roseanne, now 65, will answer the burning question about this new version of her old sitcom: Why is she doing this?

As she has admitted many times in the past, her old show drove her nuts. It also made her fabulously wealthy, and unless she has somehow frittered it all away (which is doubtful), she doesn’t need to do this new show to shore up her finances for retirement.

It has been just shy of 30 years since she first burst on the scene to introduce the first “Roseanne.” She came onstage at the Marriott Marquis theater at the ABC upfront in May 1988 (my own first TV upfront season as a journalist) and brought the house down.