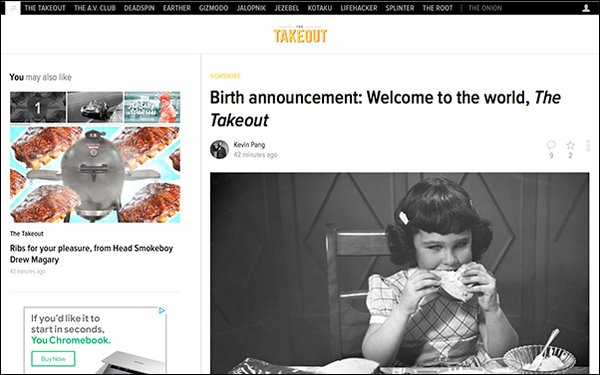 Felipe Holguin, president of Fusion Media Group,. stated food was "a natural place for us to expand" as it served a "young, diverse, affluent audience."

The Takeout’s home in Chicago makes it “a rare national food site that calls the Midwest home,” per FMG.

"Being headquartered in the Midwest gives our food site a different perspective. We are less interested in the latest buzzy restaurants and hot trends, as we are diving into Americana food cultures. We love the idea of exploring local fast-food chains, regional dishes and supermarket food,” Kevin Pang, The Takeout's editor-in-chief, told Publishers Daily.

Pang is the James Beard award-winning food editor of The A.V. Club. He has also contributed to The New York Times Magazine and Saveur, and is co-director of the Netflix documentary "For Grace."

Jen Sabella, who helped launched DNAInfo Chicago and was Chicago editor of The Huffington Post, will serve as managing editor.

Google Chromebook is The Takeout's launch sponsor. The site is a mix of videos, articles, news, reviews and guides, ranging across “high and low foods.”

“With our DNA rooted in The A.V. Club, we hope to bring that same level of geeky obsession to the world of food and drink culture,” stated Pang.

The Takeout is the second standalone site launched by FMG this year. In September, the media company debuted Earther, a site focused on the environment.

FMG has also recently created a few new verticals under its existing titles. Compete, an esports vertical, was introduced under its Kotaku and Deadspin brands, Offspring is a new parenting vertical under Lifehacker, and VerySmartBrothas is now part of The Root.