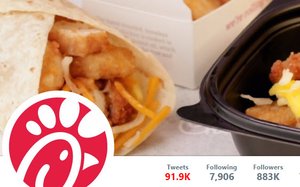 Chick-fil-A is ruling the roost among quick-service restaurants in terms of social media and offline or word-of-mouth impact, according to new ranking results from Engagement Labs.

The ranking is based on the company’s proprietary TotalSocial data, derived from continuous tracking and measurement of the key online and offline drivers of conversations about brands. Those drivers both the volume of conversations and the quality of the sentiments expressed.

The latest ranking shows the top 10 U.S. QSRs in social conversations for the six-month period April through September 2017. The first QSR ranking reflected QSRs’ performance during the 12 months ending in January 2017.

Panera, Wendy’s, Taco Bell, Chipotle and In-N-Out made the latest top 10 ranking, but not the first ranking. They bumped KFC, Subway, Pizza Hut, Popeyes and Dairy Queen out of the rankings in the latest period.

Chick-fil-A improved its sentiment score while maintaining strong volume scores during the six-month period — meaning that consumers are talking about the brand more often and more positively. “Chick-fil-A has made an effort to stay away from controversial stances, while expanding into major cities without compromising its customer service, resulting in a more positive consumer conversation around the brand,” notes the report.

Panera generated buzz during the period in part by publicizing its move to become the first national QSR to post the sugar content of beverages in its stores (and also on its plastic cups). And interest was certainly piqued by the news of Its acquisition by holding company JAB.

Wendy’s’ online sentiment and volume both rose, thanks to its sassy, innovative social media personality. In fact, a playful Twitter challenge from the brand resulted in a viral “#NuggsForCarter” movement that resulted in a fan setting a new record for retweets (and getting a year’s worth of free chicken nuggets). Wendy’s has also recently prioritized its social media marketing efforts through a partnership with Snapchat that let customers to take selfies for a good cause.

Chipotle substantially improved its online sentiment score — an encouraging trend for the chain that’s been struggling to fight back from the damage inflicted by its food-borne illness outbreaks. The chain’s introduction of a new menu item, queso cheese dip, also seems to have helped sentiment.

In-N-Out Burger’s jump up the ranks was driven largely by an increase in its offline sentiment score, indicating more positive face-to-face conversations about the brand.

On the down side, Starbucks lost momentum because of a decline in its brand-sharing scores — meaning that consumers are sharing less of its content online, and also talking less about its marketing or advertising in offline conversations, according to Engagement Labs CEO Ed Keller.

Dunkin Donuts, meanwhile, saw a decline in sentiment scores, “which is a concern because our predictive analytics show that sentiment is an important driver of future sales,” Keller says.