Media Use: Smartphones Up, Daily TV Viewing Down

Total media usage continues to rise, gaining more than a half hour a day compared with a year ago -- mostly from smartphone use.

Nielsen’s second-quarter report shows sharply higher increased app/web usage on smartphones -- gaining 43% to 2 hours/27 minutes a day from one hour/43 minutes a day in the second quarter of 2016.

In other media slippage, Internet use on a computer dropped 9% to 52 minutes a day, and AM/FM radio was off 2% (two minutes) to 1 hour/50 minutes a day.

Nearly 60% of TV homes in the U.S. now own at least one internet-enabled device capable of streaming to a TV set. 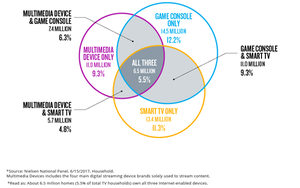