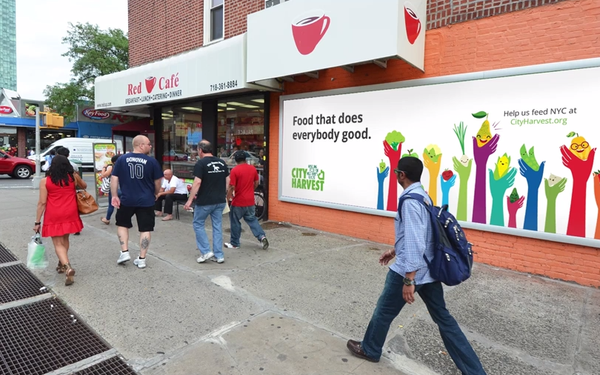 City Harvest, a not-for-profit that’s helped to feed many millions of New Yorkers over the past 35 years, has launched an ambitious new marketing campaign as it steps up its goals for the years ahead.

The organization pioneered rescuing nutritious, excess food from supermarkets, manufacturers, farmers markets and restaurants and redistributing it free of charge to soup kitchens, food pantries and other community food programs. It currently delivers to some 500 food distribution points across the city’s five boroughs, where nearly 1.3 million people struggle to put meals on their tables.

This year, City Harvest will deliver 59 million pounds of food, and its strategic plan calls for increasing that to 80 million pounds per year by 2022, reports Julia Foster, its senior director of marketing and communications.

The creative, from Makeable, intentionally departs from the traditional, rather disheartening tone of most hunger-related campaigns. Rather than focus on the problem, it takes a positive, solution-oriented approach that helps differentiate City Harvest — which is 95% privately funded — within a highly competitive not-for-profit environment, says Foster.

The work features illustrated/animated smiling fruits and vegetables and inspirational calls to action. The new TV ad, for example (below), produced by Parachute TV, briefly describes what the organization accomplishes each day and how people can join other New Yorkers to help make that happen via donations at CityHarvest.org and volunteering. It also conveys what the food means to the daily lives of individuals in very specific, visceral terms.

“Let’s gather together to make someone’s day a little more fruitful and a little bit sweeter…to give someone a fresher outlook and make someone smile from ear to ear,” says the voiceover — done pro bono by Julianne Moore (not identified in the spot), a city resident and City Harvest supporter/volunteer. “Let’s dish out the love to nourish our city and its people, one day, one meal and one New Yorker at a time…”

“We wanted to convey hope and optimism — that the solution actually already exists,” says Sam Kantrow, innovation director at Makeable, which terms itself an “innovation company” spanning strategic consulting as well as design and creative, and is working with City Harvest for the first time. “We also wanted to bring it down to the micro level — how you can help change someone’s day for the better, rather than show a picture of a hungry person with a broad headline like ‘Stop hunger.’”

The organization’s previous campaign also stressed results, but in a more documentary style, and was focused nearly exclusively on potential donors. The new campaign seeks to be “very inclusive of all our constituents,” says Foster. Input from the staff and board, as well as donors and volunteers, has been that the campaign makes them feel “happy and proud” about their work, she says.

The creative also readily lends itself to translation to a variety of media — for use on the organization’s trucks, as well as OOH (above) and the other traditional and digital media, notes Michael Kantrow, co-founder and managing partner, Makeable.

The media plan, from longtime City Harvest volunteer partner Horizon Media, comprises mostly donated (largely remnant) time and space. The outlets include 24 radio stations (representing roughly 34% of the media allocation); 10 TV stations (25%); 24 digital and other partners, including influencers and other social media partners (19%); and four print newspapers. Most of the media launched this week.

The TV and radio creative, in 15- as well as 30-second versions, is running throughout the year but with concentration in the critical fourth quarter, according to Melissa Flynn, VP, brand group director, Horizon Media.

“Social influencers will be used to boost awareness through City Harvest tote or cookbook giveaways and postings showing City Harvest volunteering,” she says. “And in addition to static and animated banners across desktop and mobile, City Harvest will have a handful of custom-content opportunities with a few different vendors.”