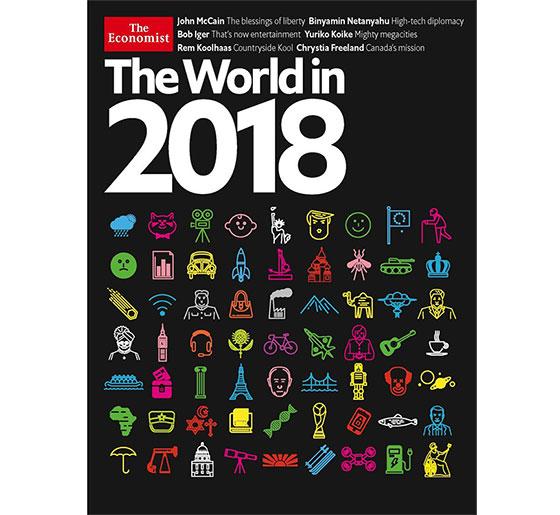 The Economist has today unveiled the 32nd edition of its special issue “The World in 2018," which will look ahead to the World Cup in Russia, midterm elections in the U.S, tourists taken around the moon, and a number of anniversaries, from 50 years since the assassination of Martin Luther King and Robert Kennedy to 10 years of Apple’s App Store.

The issue “predicts that 2018 will be a nerve-jangling year as people across the world attempt to escape the tensions of politics and the frenzies of technology. But the world can also look forward to an economy growing at a respectable pace and the distraction of global events, including the Winter Olympics and the World Cup,” according to The Economist.

Daniel Franklin, who edited the issue, told Publishers Daily he thinks readers will especially enjoy the special section on happiness  “at a time of heightened uncertainty.”

"It will be a critical year on many fronts, including North Korea's nuclear challenge, the Brexit negotiations, China's economic reforms and America's midterm elections, as well as the presidential polls in Brazil and Mexico." He predicts "intriguing battles for influence, ideas and leadership,” Franklin stated.

The print edition of “The World in 2018” will have a global circulation of 1 million plus, with a readership of 2 million in the English print edition.

The Economist also holds a number of events in Asia, Europe and the States that revolve around “The World In” franchise, Beard added.

Mark Beard, publisher of "The World In" and SVP of global digital media and content strategy at The Economist, said the “longer shelf-life” of the issue “provides an alternative environment within which brands are able to reach a globally curious audience."

He added the issue is "particularly popular with publishers that syndicate and license content from the publication to bolster their own editorial offerings. We generate revenue from second rights, with more than 30 publishers around the world choosing to print and publish foreign language editions of the publication,” Beard said.

The publisher cited reader research showing the average time spent reading the publication is over five hours and 95% of readers intend to buy the next year's edition.

There is a digital edition of “The World in 2018” as well. Subscribers to The Economist can access it as part of their membership. It will also live within The Economist app carousel starting tomorrow, a spokesperson told Publishers Daily.

Nonsubscribers will have to pay to read the digital edition of “The World In,” for the same price as the print edition, $13.95.

Audio editions, a range of 2018-themed videos and an Economist Radio series are also part of the franchise.