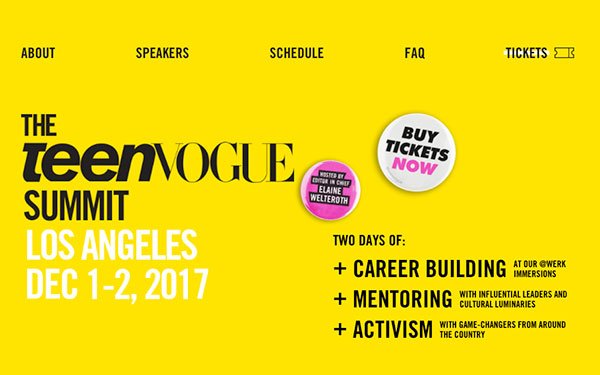 Earlier this month, Teen Vogue announced it would be shuttering its print publication immediately, transitioning to an online-only magazine. However, on December 1 and 2, the publication will bring its editorial vision to its audience, when the first Teen Vogue Summit launches in Los Angeles.

Hosted by Teen Vogue editor in chief Elaine Welteroth, credited with the publication’s prominent and celebrated political and activist-centric voice, the summit speakers include actress Rowan Blanchard, actress, scholar and activist Yara Shahidi, founder and CEO of Girlboss media Sophia Amoruso, and former First Lady and Secretary of State Hillary Rodham Clinton, who will give the keynote address and be interviewed by Shahidi.

Blanchard and Shahidi have both appeared on the cover magazine’s print edition.

Teen Vogue, which offered assistance in the form of underwritten tickets and support with travel costs to 50 attendees, called the event a chance to “empower and equip our readers with inspiration, insight, tools and connections to help [them] pursue [their] passions and achieve [their goals].”

The publication views the summit as an opportunity to extend its brand to a live audience, connecting readers with each other and potential mentors at sessions featuring representatives from companies like YouTube Space L.A. and Girlboss Media. Event sponsors include Facebook Messenger, Google Pixel 2, and Sephora. LIFEWTR, PBteen and TOMS are partnering with the summit.

Raul Martinez, creative director at Conde Nast, stated: “With a collaborative, next-gen approach to idea development and creative work, we believe we can create the unexpected, and be a catalyst for new norms.”