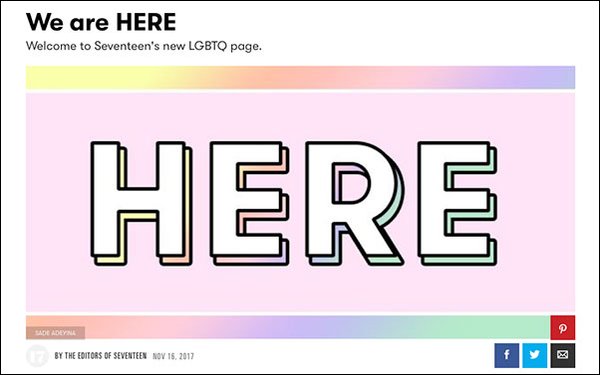 “This will be a space dedicated to LGBTQ readers and allies aimed at amplifying the voices of LGBTQ-identified teenagers—something the world is missing right now. Both a resource and a place for teens to express themselves, we wanted to build a community we wish had existed when we were growing up,” wrote the editors of Hearst-owned Seventeen magazine in a post on the site.

The editors added that one year after the election of President Trump, a space for the LGBTQ community is needed “now, more than ever” for “representation and visibility.”

“A lot of us don’t come out until our early twenties,” the post continued. “Being queer outside of big cities can be isolating, lonely and confusing, especially when you don’t see people in the media who look and think like you do. The editors of Here have been through this, and we wanted to create the type of community we wish we’d had growing up—one that’s a safe space for queer teens to amplify their voices.”

Editors of Seventeen  and LGBTQ teens and influencers will contribute content.

Seventeen.com editor Kristin Koch told Fashionista that in the last year, the brand has shifted gears to become more social-first to better serve its "hyper-digital" audience. It has producied content for Snapchat Discover and original programming on YouTube and Facebook.

Here will live primarily on Facebook and Instagram, which is already loaded with fun and inspiring memes and photos, such as one featuring sneakers with rainbow-colored laces. But it also gets its own vertical on Seventeen.com for articles and essays, and is located on the main navigation bar.

"While there are many amazing resources and platforms for the LGBTQ community, many of which we're excited to work with, what we felt was missing was a place dedicated to young people who were exploring their identities and still coming out in the world," Koch told Fashionista.

Last month, Condé Nast introduced its own LGBTQ-focused brand called Them, its first new independent title in a decade, created by digital editorial director of Teen Vogue and Allure, Phillip Picardi. Them is aimed primarily at Generation Z, the generation after millennials.

Magazine brands created for the gay community have blossomed this year.