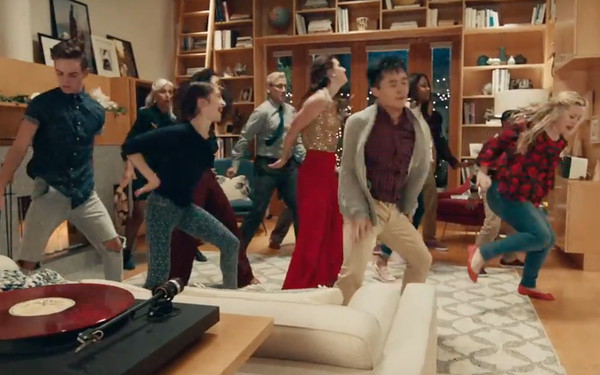 Having shown how its wireless speakers can “reset the mood” to transform a house or room with music in general, Sonos is showing how that mood can apply even to the holidays.

With a new short film, the brand is showing off how its voice-control features can turn a whole home into a festive holiday party.

“We are taking that concept into a joyous holiday context and showing how the Sonos system can transform your whole home instantly, not just one room or one device,” Dmitri Siegel, Sonos’ vice president of global brand, tells Marketing Daily. “In this case, the right song brings a whole holiday party to life throughout the home.”

The new film, "A Very Sonos Holiday," depicts a multigenerational, multicultural holiday gathering in which everyone is off in their own worlds in the house, watching devices or sleeping. After using the speaker’s voice control to play Dee-Lite’s “Groove Is in The Heart,” each member at the gathering is overtaken by the music to begin dancing. Eventually, all the partygoers come together for a coordinated dance routine before sitting down to a holiday meal. Drawing on director Jason Koenig’s experience in music videos, the film has much more of a music video than “advertising” feel. That is intentional, Siegel says.

“While the new campaign doesn’t feel like an ad, it’s still an education platform. We actually built a special feature into the Sonos app as part of this campaign, adding a ‘Play Everywhere’ button in the rooms menu of the Sonos App which will instantly group all rooms together,” he says. “Once your whole home is grouped together, you can just say, ‘Play Groove is in the Heart’ and it will play throughout your home.”

The ad, which will run in digital channels as pre-roll on streaming services and cinema, is timed for the kick-off to the holiday selling season, to take advantage of Black Friday/Cyber Monday offers, Siegel says.