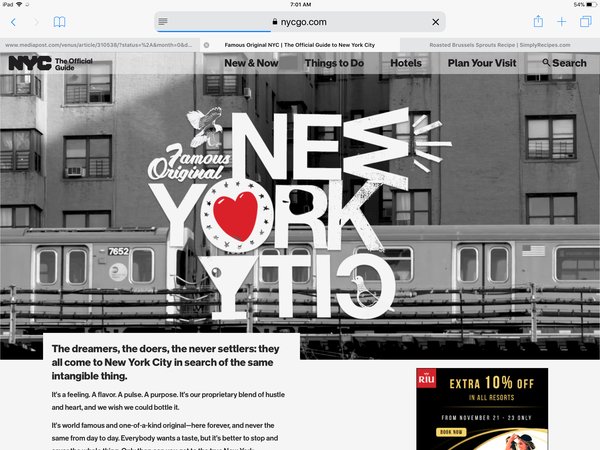 The value of the campaign is estimated at $15.6 million, per the organization.

The “True York City” creative showcases both well-known and lesser-known areas of the five boroughs and invites New York residents to submit their own images.

Artwork depicts the phrase “Famous Original New York City" with typography using a sampling of NYC visuals from past and present as an art form. Graphics include an apple (“The Big Apple”), five noise lines to represent the boroughs and a heart, in homage to the “I Love NY” logo, which debuted 40 years ago.

JCDecaux is introducing out-of-home advertisements in Boston, Chicago and select national shopping malls through mid-February, all designed to drive viewers to NYCgo.com. New York City media will cover all five boroughs and showcase the #TrueYorkCity hashtag. To further amplify the social media message, the campaign is working with Facebook, Instagram, Weibo and WeChat in China.

Internationally, this is the first JCDecaux out-of-home media presence for NYC & Company in Argentina, Chile and Sweden. The campaign will also attempt to lure travelers in Norway, Australia, Brazil, France and Spain.

Among these alliances, British Airways has introduced ads promoting travel offers/packages through February 2018; Aeromexico is running nationwide media through early January and CANUSA is debuting nationwide media in Germany with additional creative to come roll out in 2018.

In addition, NYC & Company holds multiple strategic city-to-city tourism alliances internationally. Nearly $1 million of in-kind media contributions will include an Air Canada partnership running through December. There will be a campaign launch in Cape Town, South Africa in February.

This roll-out coincides with NYC & Company having appointed Elan Cole as creative director in July 2017.