Snickers Brings 'Hungerithm' To The U.S. 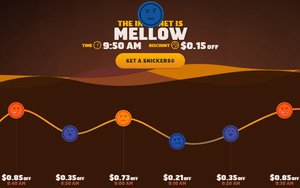 Following a successful run in Australia, launched in spring 2016, Snickers is bringing a version of its algorithm-driven “Hungerithm” promotional program to the U.S.

The algorithm checks social media posts in real time against a list of 3,000 commonly used words and phrases, including slang, to determine sentiment and capture a snapshot of how people are feeling.

It also generates prices for Snickers bars that vary according to the internet’s mood. As an extension of Snickers’s “You’re Not You When You’re Hungry” umbrella campaign, the program offers bigger price discounts when the mood is negative (e.g. “irritable” or “fuming”) than when it’s positive or “mellow.”

Through Dec. 22, fans can monitor the program online and lock in a price for a Snickers by generating a coupon that’s redeemable at participating U.S. 7-Eleven stores.

The Hungerithm was developed by Clemenger BBDO Melbourne, BBDO New York and The Integer Group.

The Australian version generated strong business results, according to the brand. It also garnered awards, including honors for innovative social media use and media planning.