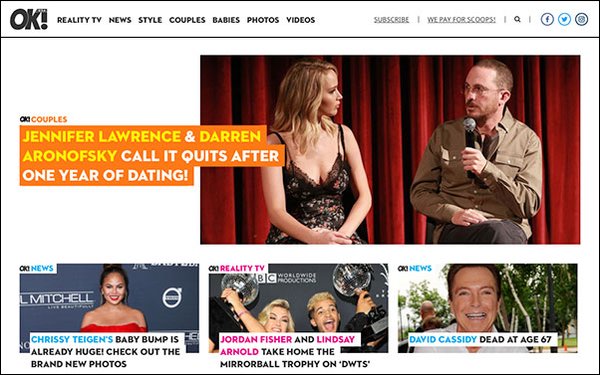 American Media, Inc., (AMI) home to a stable of celebrity and fitness publications, announced an upgrade to OK!’s website. The popular British celebrity magazine crossed the pond in 2011, when the U.S. edition was bought by AMI. It has long been a stalwart of the celebrity entertainment machine.

Now it adds a few enhancements.

They include a new reality TV vertical and a Tune-In Ticker, which recommends new and popular shows to the site’s readers. The updated site also features opportunities for advertiser-led channel sponsorship.

The revamp impacts the mobile site, providing “an immersive in-article video experience” via a new in-line mobile vertical video player. AMI hopes the redesign will allow for a decrease in page load times and an increase in pages viewed.

The site saw an 8% gain in page views in October with 35 million views; it hopes the improvements will strengthen those gains.

Separately, Wenner Media, the once-home of AMI’s US Weekly, continues its bid to sell flagship publication Rolling Stone. The magazine, which turned 50 this month, has been on the auction block since September, when nearly 30 investors were interested in tossing in their bids.

That number has narrowed to three, including Jay Penske, publisher of Women’s Wear Daily and Variety, Bryan Goldbery, publisher of Bustle, and Irving Azoff, a music industry manager, who is backed by James Dolan, cable mogul and owner of the New York Knicks.

The winner will hold a majority 51% stake in the magazine, while Singapore-based company Bandlab Technologies will control the other 49%.